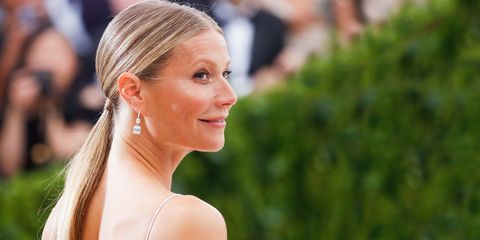 Gwyneth Paltrow and Brad Falchuck reportedly got married in a secret ceremony last week—and she may have just officially confirmed it. She was spotted wearing a new ring in place of her sapphire engagement ring.

At the opening night of the theater production Head Over Heels on Wednesday Paltrow was photographed wearing a signet-style ring that features Falchuck's initials.

Last week, the actress and Glee co-creator held what was reported to be an engagement party, but some are convinced the star-studded event was actually a surprise wedding.

The possible newlyweds got engaged in January after dating for more than three years. Paltrow was previously married to Chris Martin from Coldplay for 11 years before they divorced in 2014.

Related Stories
Gwyneth Paltrow Might Have Had a Secret Wedding
Gwyneth Paltrow Is Engaged to Brad Falchuk
Alex Warner
This content is created and maintained by a third party, and imported onto this page to help users provide their email addresses. You may be able to find more information about this and similar content at piano.io
Advertisement - Continue Reading Below
More From Celebrity
Beyoncé Stuns in a Mesh Dress With Matching Gloves
Lizzo and Chris Evans Had the Best IG Interaction
Advertisement - Continue Reading Below
Travis Shared PDA-Heavy Bday Tribute to Kourtney
How the Queen Ends Awkwardly-Long Handshakes
The Queen Has a Rule Against Bad Talking Family
The Queen Took a Pic of Philip With Her to Funeral
The Queen's Tolerance Was the Key to Her Marriage
J.Lo "Likes" Shady IG Post After A-Rod Split 👀
Beyoncé Shares Photos of Her White Power Suit
Will & Kate Welcomed Harry Back Into Their Group