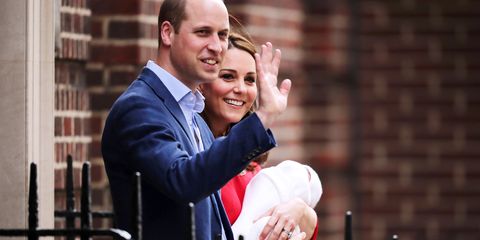 We know that the royals are all about tradition—which is why many thought Prince William and Kate Middleton would announce the name of their third child on Wednesday. That would follow suit with how Will and Kate handled announcing Prince George and Princess Charlotte's names to the public—both were announced two days after their births.

Since the youngest prince was born on Monday, royal watchers hoped for an announcement on Wednesday—but none came. There is a very royal reason for the delay, however: Royal etiquette forbids overshadowing other royal events, and Wednesday already had a big one.

Wednesday was Anzac Day, a national day of remembrance in Australia and New Zealand commemorating those lost in war or who sacrificed their lives for their country. Prince Harry, Meghan Markle, and even very sleepy new dad William all attended services to commemorate the occasion.

Will and Kate likely knew that announcing the name of their third child would most definitely overshadow the remembrance events and chose to break their own tradition of the two-day wait and push the name announcement.

“It’s perfectly possible that they delayed the announcement about the baby’s name so as not to overshadow Anzac Day," royal expert Penny Junor told Country Living UK. "It's just lucky that the baby itself arrived a couple of days before. I don’t think they would have delayed that had the days clashed—whatever etiquette might dictate!"

That's true—infants just have no sense of etiquette.

This isn't the first time the royals have made adjustments to avoid overshadowing one another's events. Last May, when Pippa Middleton got married, Meghan Markle skipped the ceremony entirely and only stealthily attended the reception after. News of Meghan and Harry's relationship was still new then and if Meghan had attended the ceremony, it would have almost certainly overshadowed Pippa's big day.

This is one royal rule that definitely makes sense.

Related Story
Prince William Struggles Not to Fall Asleep
Kayleigh Roberts Contributor Kayleigh Roberts is the weekend editor at Marie Claire, covering celebrity and entertainment news, from actual royals like Kate Middleton and Meghan Markle to Hollywood royalty, like Katie Holmes and Chrissy Teigen.
This content is created and maintained by a third party, and imported onto this page to help users provide their email addresses. You may be able to find more information about this and similar content at piano.io
Advertisement - Continue Reading Below
More From The Ultimate Guide to the Royal Family
Queen's Cousin Accused of Selling Access to Putin
Meghan Wore a Meaningful Necklace for Vax Live
Advertisement - Continue Reading Below
Queen Elizabeth Is Now Selling Beer and Gin
Meghan Markle Wore Carolina Herrera for Vax Live
Princess Charlotte, 6, Tells Everyone She's 16
Meghan Wears Cartier Tank Watch for Vax Live
Meghan Discussed Her Daughter in Vax Live Speech
Prince Harry Talks Digital Pandemic at Vax Live
Harry and Will Have Been Arguing for Months Now
Prince Harry Doesn't Regret His Oprah Interview