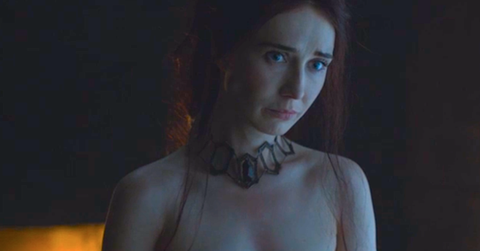 On Sunday night and morning Monday, the big headlines from the Game of Thrones Season Six premiere read something like this: "Let's Talk About THAT Big Twist From Game of Thrones." But was it really that big of a surprise that Melisandre is an old woman using some sort of magic to keep her young? Viewers knew she could give birth to shadow babies, she had ancient wisdom of a forgotten god, that her entire mystique was the trope of every witch from a Disney fairytale. She was old—that has always been the assumption.

The real question is, what does this mean for the show, what does this mean for the character, and how will this bring back Jon Snow? The question of how, though, is what people seem to be obsessed with for now. It's assumed, based on how the final scene in Episode One was filmed, that Melisandre's necklace, the one she's worn in almost scene, is making her beautiful. But, as savvy (we can say nerdy, or even obsessive) viewers pointed out, she has been in one scene without the necklace. This one:

With this evidence, some fans have been calling out Game of Thrones showrunners for continuity errors. This might be an explanation, but people on the internet, as they tend to do, have better reasoning. Like this one:

[I]n that bathtub scene she talks about the smoke and mirrors she uses to make people believe in her. The only person looking at her in that scene was Selyse, a devout follower. So maybe she used some other trick… Or… Maybe Selyse could always see the red woman as she was. She never seemed concerned that this sexy lady was tempting her hubby all the time. Hmmmm.

Or this one that some guy posted more than a year ago:

Of course, this makes all the more fascinating the show episode (S4E7) where Melisandre is taking a bath without her ruby choker. This scene was not in the books, many wondered if D&D had messed up, but I think the omission was quite deliberate.

The only person to see her like this is Stannis wife Selyse. Selyse has this strange expression the entire time. Like she cannot look directly at Melisandre yet also cannot look away. At first you think it is that of a religious "uptight" person seeing a naked and very sexual woman. But if you rewatch the scene, and "pretend" to yourself that Selyse is seeing Melisandre as she actually appears, it actually fits better. WE still see the seductress, Selyse sees the hag. She is horrified yet fascinated and not at all shocked. She knew all along (just like she knows the true fate of her daughter), Melisandre explains she does not need to use her "tricks" on the true convert (Stannis is NOT a true convert but his wife is).

And these are all good theories, but it doesn't really matter if it's the necklace or even if this is a continuity error. The writers, now that they're free of George R.R. Martin's books, can give any sort of explanation they want for Melisandre's youth. They can say she thrives on the burnt skin from The Lord of Light's sacrifices. They can say she does pilates, the Atkins Diet, barre, or stays away from gluten—literally anything. Assuming they haven't filmed more scenes where the necklace is the source of Melisandre's youth, they can write any explanation for it they want.