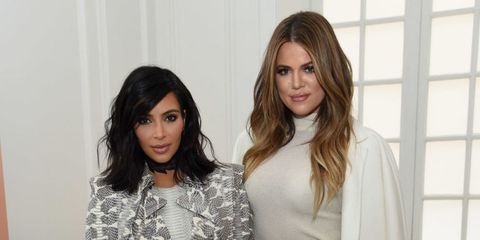 Looks like the Kardashians are still trying to figure out how they feel about Rob and Blac Chyna.

In the latest teaser from Keeping Up with the Kardashians, Kim and Khloé delve deep into their opinions about the fact that their brother is dating their sister's boyfriend's ex—and why, even though they're super happy for Rob, they're also pretty disappointed in him, too.

"If she gave him confidence, more power to her," Kim says in the video. "After Rob and Blac Chyna started dating, Rob is now like all over social media and like, out and about. He hasn't been like this in so long, that even though there's been some drama, if this is what it takes then I don't care who he's dating…I'm so happy that he's just feeling better about himself."

Khloé, on the other hand, doesn't seem to be quite so on board. But that being said, they both seem to agree that, at the very least, Rob should have been more honest about the relationship with the family and told Kylie about it himself.

"Am I happy he's out and about? For sure," Khloé says. "Am I disappointed that Rob isn't talking to me after he got out of my house? Yeah, because I've been the only one that stood by him and defended him and wanted the best for him. So, that's just where it gets frustrating."

Of course, this conversation was likely filmed months ago, and things have definitely improved since. With a baby on the way, the Kardashians has been doing everything in their power to keep the peace; and even Kylie seems to be getting along with Blac Chyna. Nonetheless, this week's episode of KUWTK is definitely going to be a must-watch, and this teaser makes it seem like the family is about to get super honest about all the recent drama.

This content is created and maintained by a third party, and imported onto this page to help users provide their email addresses. You may be able to find more information about this and similar content at piano.io
Advertisement - Continue Reading Below
More From Celebrity
Angelina Jolie Was Spotted Leaving Her Ex's Place
What Happens on Katie's Season?
Advertisement - Continue Reading Below
Ben Affleck Had Dinner With J.Lo and Her Kids
Jessica Biel Talked "Secret COVID Baby" Phineas
Katie Holmes Paired Baggy Jeans With a White Tank
Why Rachel McAdams Turned Down 'Devil Wears Prada'
Did the Queen's Brooch Send a Message?
Jennifer Lopez and Ben Affleck: Everything We Know
A Look Back at Gwen Stefani & Blake Shelton's Love
Beyoncé Celebrates Twins Rumi and Sir Turning 4