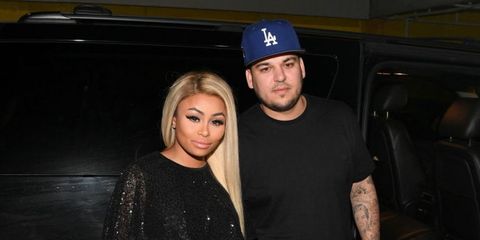 After weeks of rumors and speculation, E! confirmed Wednesday that American royalty Rob Kardashian and Blac Chyna are definitely getting their own TV show, premiering later this year. The new show's working title is Rob & Chyna, and will consist of six one-hour episodes which "will follow the lovebirds from their engagement to Chyna's pregnancy, and everything in between." There will also be a separate special documenting the birth of their child.

"Very few love stories have created as much pop culture buzz as Rob and Chyna's," Jeff Olde, E!'s executive vice president of original programming and development, said in a press release. If they gave out special Emmys for Biggest Understatement of the Year, he would win one. Rob and Chyna have not yet commented on the news, nor have any of the other Kardashians. Time to clear off some space on the DVR!

Eliza Thompson senior entertainment editor I’m the senior entertainment editor at Cosmopolitan.com, which means my DVR is always 98 percent full.
This content is created and maintained by a third party, and imported onto this page to help users provide their email addresses. You may be able to find more information about this and similar content at piano.io
Advertisement - Continue Reading Below
More From Celebrity
This Is Dax and Kristen's Approach to the Sex Talk
Angelina Jolie Dodged a Question About The Weeknd
Advertisement - Continue Reading Below
Kourtney and Travis Want a "Destination Wedding"
Harry Panicked About the Queen's Hospital Stay
Olivia Munn Doesn't Care About "Settling Down"
These 83 Twitter Accounts Harass Meghan Markle
Adele's Ex Came to a Special Taping of Her Album
Kristen Stewart on a "Spooky" Moment Playing Diana
Travis Covered His Ex' Name With Tattoo for Kourt
Kendall Jenner Wore a Bedazzled Pink Cowboy Hat