Today's Top Stories
1
PSA: Anthropologie Is Having a Sale All Weekend
2
Untangling Hair Bias
3
I Started a Company to Pay My Medical Bills
4
Doutzen Kroes Goes Behind the Scenes at Dior
5
The Best Friends Having Babies Together
Shutterstock

When you are trying to sneak a video 😂

This isn't the first time Blue has set the ground rules. At the 2018 Grammy's, she told her mother and father to calm down while they were applauding a performance during the award show. Though Blue made the rules clear this time around, her grandma still decided to film the theater, which is really the only #content we need. 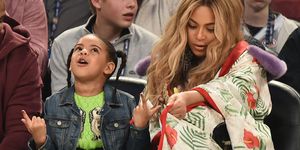 Beyoncé and Blue Ivy Dancing Is the Cutest Ever
Beyoncé Goes Shopping at Target with Blue Ivy
Rachel Epstein Associate Digital Editor Rachel Epstein is the associate editor at MarieClaire.com, where she covers celeb and royals news, culture, lifestyle, and politics.
Advertisement - Continue Reading Below
More From Celebrity
Why Harry and Meghan Should Keep Their Protections
Taylor Swift Explains Why She Loves Joe Alwyn
Advertisement - Continue Reading Below
Real Humans Justin & Jessica Are Going to Therapy
Why the Queen Canceled One of Her Annual Events
Channing Tatum Shuts Down Jessie J Hater on Insta
Celebrities Who Are Mistaken for Other Celebs
Dolly Parton, Icon, Started a Viral Meme
Meghan & Harry's Trademark's Been Blocked for Now
Khloe Kardashian's House Has a Room for Extensions
Katie Holmes Stuns in a White Oversize Coat