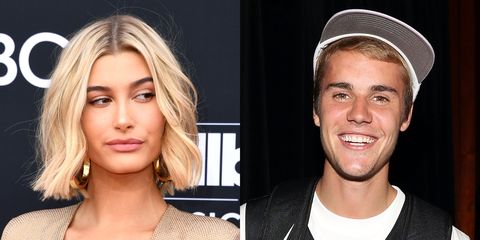 Hailey Baldwin and Justin Bieber are totally cool, according to a new interview Baldwin did with The Times UK.

The 21-year-old model says she's looking for love (she'd like to get married and have kids in the next five to 10 years), but that it can be hard in her industry.

"The dating pool is small," she explained. "It’s rare to find somebody that has the same ideas and morals as me. I have found people like that before, though, which is refreshing."

At that point, the conversation turned to Justin Bieber, who Baldwin dated briefly in 2015.


"Justin and I were friends for a long time," she said. "I met him when I was really young and he was one of my best friends. Everybody knows that at a certain point in time that turned into something else, but that just happens when you’re 18, 19. It was what it was. We went through a long period of time when we weren’t friends. We didn’t speak for quite some time and there was a lot of weirdness that went on. We’ve moved past that."

Although things between them were "weird" for a while, she says they've since moved past the drama and rekindled their friendship.

This isn't the first we've heard of a reconnection between the exes, of course. During the Jelena revival of 2017, the pair reportedly entered couples therapy to work through the trust issues that sprang from Bieber's decision to reconnect with Baldwin and clear the air. Although Bieber reportedly told Selena Gomez that he had called Baldwin as part of "his new 'open and honest' approach to life," she wasn't thrilled with the contact, as Bieber had been unfaithful to her in the past.

Baldwin says that she and Bieber are on good (and totally platonic) terms these days.

"I’d never been through [a high-profile relationship] like that. But it brought both of us to the realization that we just work much better as friends," she explained. "He’s somebody I really cherish. Now it’s a very mature situation. It’s good.'"

Kayleigh Roberts Contributor Kayleigh Roberts is the weekend editor at Marie Claire, covering celebrity and entertainment news, from actual royals like Kate Middleton and Meghan Markle to Hollywood royalty, like Katie Holmes and Chrissy Teigen.
This content is created and maintained by a third party, and imported onto this page to help users provide their email addresses. You may be able to find more information about this and similar content at piano.io
Advertisement - Continue Reading Below
More From Celebrity
Ben Affleck and Jennifer Lopez Made Out in NYC
Lady Gaga Stunned in an Old Hollywood Look
Advertisement - Continue Reading Below
Olivia Rodrigo Looked Jaw-Droppingly Beautiful
Will's "Alleged Bullying" Drove the Sussexes Out
Sam Asghari Opens Up About Britney Documentaries
Prince Harry’s Memoir Is Concerning Royal Insiders
Meghan Markle Wore Some Familiar Earrings in NYC
Harry and Meghan Could Visit England for Christmas
Meghan Markle Looked Gorgeous at Global Citizen
Harry and Meghan Are Taping Their NYC Trip