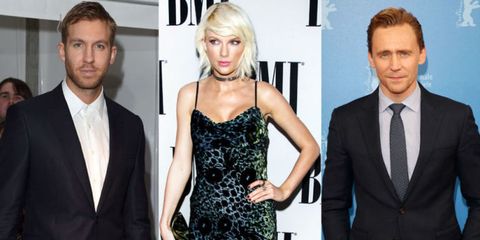 Yesterday, the world was rocked by steamy pictures of Taylor Swift making out with Tom Hiddleston in Rhode Island. It's not that Hiddleswift isn't adorable because they actually make a lot of sense (did you see them dancing at the Met Gala?), but it was a little shocking seeing them smooching so soon after her split from Calvin Harris.

After the news broke, Calvin deleted his post-breakup tweet saying he had love for Tay and erased her completely from his social accounts. A pretty clear sign he was hurt by the news.

According to TMZ, an inside source said Calvin is "pissed" and "feels betrayed" by Taylor. Based on this video TMZ filmed of Calvin getting into his car this morning, they could be right.

When a paparazzi asks Calvin how he feels about the Taylor and Tom news, Calvin fixes him with the most piercing stare and ignores him so fiercely that you could practically hear him saying, "Don't you dare even go there." If you ever wondered what throwing daggers with your eyes looks like, Calvin Harris just gave you the answer.

Then he climbs into his car and slams the door without a word. You can watch the clip over at TMZ. Clearly, Calvin got most of his frustration out on Twitter last night and seems to have no further comment.

Noelle Devoe Entertainment Editor When I'm not holed up in my room going on a completely unproductive Netflix binge or Tumblr stalking Timothée Chalomet, I'm searching for awesome celeb news stories that Seventeen readers will love!
This content is created and maintained by a third party, and imported onto this page to help users provide their email addresses. You may be able to find more information about this and similar content at piano.io
Advertisement - Continue Reading Below
More From Celebrity
Emma Watson Stunned at the Earthshot Prize
Kate "Didn't Have Much Energy to Bond" With Meghan
Advertisement - Continue Reading Below
Blake Lively Trolled Ryan Reynolds Again
Kourtney Kardashian and Travis Barker Are Engaged!
See Kate Middleton's Subtle Environmental Look
Prince George "Adored" Seeing Dinosaur Fossils
Kate Middleton Borrows The Queen's Fashion Trick
Princes Charle and William "Competing" Over Causes
Lilibet May Be Christened in California After All
The Sweet Family Photos in Prince William's Office