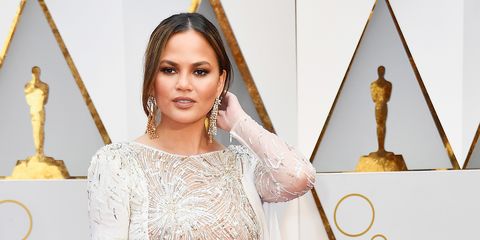 If you cringe every time you see a new headline about Meghan Markle's dad, Thomas Markle, you're not alone. Chrissy Teigen took to Twitter to air her feelings about Thomas, who has given numerous tabloid interviews since his daughter joined the royal family.

“This guy...this guy sucks,” Chrissy wrote in a tweet that also featured screenshots of some of the cringiest of Thomas' recent headlines. “What is wrong with him? Let your daughter be happy, please. This is embarrassing."

this guy...this guy sucks. what is wrong with him? let your daughter be happy, please. this is embarrassing. pic.twitter.com/FADsBT5sfX

The headlines highlighted in the tweet include one in which Thomas slams Meghan for cutting off contact with him since her wedding and quotes the 74-year-old as saying, "Perhaps it would be easier if I were dead."

In another headline screencapped by Chrissy, Thomas claims that Prince Harry's late and widely-beloved mother, Princess Diana, "would have loathed the way I've been treated." In the same headline, Thomas reportedly claims not to care if Prince Harry ever speaks to him again—not that Harry could be blamed for staying silent with his in-law, if this gossip rag parade continues.

This all comes after reports that Thomas Markle faked the heart surgery he claimed prevented him from attending Meghan's wedding in May and other reports that he staged paparazzi photos that appeared to show him preparing to visit her in the UK. And, of course, Markle has infamously given a string of paid, tell-all interviews since Meghan became a Duchess

Chrissy is right: Everything about this just sucks.