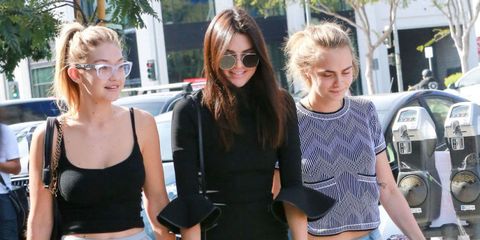 Kendall Jenner, who describes herself as the "most awkward" of the Kardashians, took a moment to tellAllure that she has her own exclusive girl gang—one with Hailey Baldwin and two Taylor Swift squad members (Gigi Hadid and Cara Delevingne, pulling double duty). This one has a name, she adds: "This is going to sound really, really lame, but we all call ourselves the Super Natural Friend Group. Because we all have such cool individual lives and we've been dreaming about them since we were so young."

Her love life is kind of a mess. (Right now, she may or may not be back on with Harry Styles and off with July boyfriend A$AP Rocky.) Blame it on her age, she says: "I just—my personal life, I'm so young. Whoever I'm dating, or going to be dating, is young, too. So I don't think it's figured out. Do you know what I mean? So if I don't know what it is, I'd rather not let everyone else know."

Jenner would like you to know though that she loathes when certain people (close friends, family, Kylie Jenner) can't put their phone down. "I find it offensive if you're with someone at a dinner and they're just sitting on their phone the whole time. I take that personally. Like, am I not interesting enough for you to talk to me? It's so crazy because even though we talk about trying to be present, everyone wants to be in the future now."

She then directly calls Kylie out again for that one vacation she didn't put her iPhone away. "It was the first time we had ever been to this beautiful place [Thailand], and we were sitting in a car. I was just zoning out, taking it all in. And Kylie wouldn't put her phone down. I'm like, 'That's so crazy to me that you're not experiencing this.' That was the moment it kind of clicked for me. And I didn't like it. So sometimes I delete Instagram or Twitter or Snapchat off my phone for a couple days."