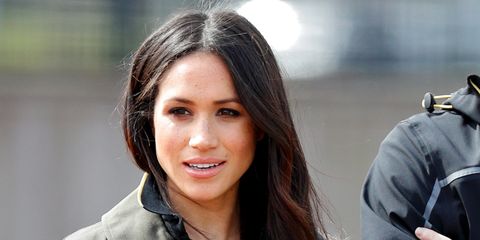 For the most part, Meghan Markle's life has been going great. She married the love of her life. She gets to dedicate herself to meaningful charity work. And she has some kickass new in-laws who love her to pieces.

Unfortunately, things haven't been as smooth on Meghan's side of the family. While she and her mom, Doria Ragland, are close as ever, there's been some...let's call it "tension" between Meghan and her father, Thomas Markle. The 74-year-old made headlines earlier this year for staging adorable paparazzi photos that appeared to show him preparing for the royal wedding and then skipped his daughter's nuptials all together because of a health issue (which was also later rumored to be fake).

He's also given a slew of tell-all interviews and openly criticized Meghan, Prince Harry, and pretty much the whole royal family. It's been a cringe-inducing saga, to say the least.

Now, as Meghan's planned solo trip to the United States nears, speculation is mounting that she might meet with her dad and try to patch things up.

"The possibility of a reunion has been discussed and Meghan looks set to incorporate it into her trip," a source told The Mirror. "Thomas is apparently keeping two dates free at the end of the month with a view to traveling from his home in Mexico to LA to meet his daughter. The location and exact dates will be top secret for both their sakes. It is a very sensitive time for them, but the intent seems to be to heal the rift."

Here's hoping that, if this "top secret" meeting does take place, Thomas actually keeps it private, but let's face it, there's every chance he leaks the audio on Snapchat or something.

Kayleigh Roberts Contributor Kayleigh Roberts is the weekend editor at Marie Claire, covering celebrity and entertainment news, from actual royals like Kate Middleton and Meghan Markle to Hollywood royalty, like Katie Holmes and Chrissy Teigen.
This content is created and maintained by a third party, and imported onto this page to help users provide their email addresses. You may be able to find more information about this and similar content at piano.io
Advertisement - Continue Reading Below
More From The Ultimate Guide to the Royal Family
The Queen's Corgis Are Helping Her With Her Grief
Charles is Looking Forward to Seeing Harry Again
Advertisement - Continue Reading Below
Will & Harry to Walk Together at Philip's Funeral
Prince Charles Addresses Prince Philip's Death
Prince William Pulls Out of 2021 BAFTA Appearances
Prince Philip Said He Had No Desire to Live to 100
The Queen Was by Prince Philip's Side When He Died
Prince Harry Is "Really Upset" Over Philip's Death
Will Harry & Meg Attend Prince Philip's Funeral?
The Queen Is Hopeful Prince Harry Will Return Home