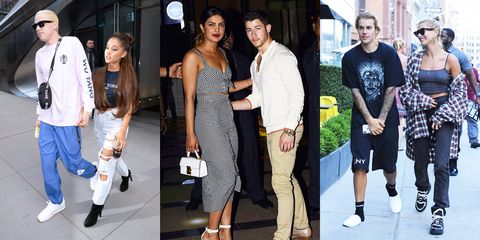 In June, Saturday Night Live star Pete Davidson and Ariana Grande confirmed that they were engaged (rumors of an engagement started after they were together for just three weeks). In early July, Justin Bieber and Hailey Baldwin got engaged during a vacation to the Bahamas. And today, Priyanka Chopra and Nick Jonas confirmed their own engagement, after speculation that began in late July.

Now that Pete, Justin, and Nick have all put their respective rings on it, let's take a moment to compare the rings that say "Hey, I know we haven't been dating that long, but let's make this thing legally binding."

In the Summer 2018 quickie engagement outbreak, Ariana Grande and Pete Davidson are the patients zero.

Ariana didn't formally debut the ring on Instagram, but she did start wearing it during all of her public appearances and performances.

Pete reportedly spent $93,000 on the three-carat pear-shaped ring. In an interview with GQ, Pete revealed that he texted Ariana pictures of engagement rings after their first date and that she responded by telling him which were her favorites.

Next up, we have Hailey Baldwin, who is proving herself to have superhero strength as she carries around the ginormous ring Justin Bieber proposed with. Justin picked out the elongated, oval-shaped diamond himself. It's reportedly between six and ten carats and has an estimated value of half a million dollars.

Hailey is notoriously low-key about her relationship on social media, but she has posted a couple of photos that show off her rock.

Nick Jonas and Priyanka Chopra have both showed off her ring in photos on Instagram confirming their engagement. The cushion-cut ring is approximately four carats and cost Nick about $200,000, according to diamond experts.

Here's a side-by-side of all three rings, because you know you need it:

Left to right: Ariana Grande, Priyanka Chopra, and Hailey Baldwin’s engagement rings.
InstagramGetty Images
Kayleigh Roberts Contributor Kayleigh Roberts is the weekend editor at Marie Claire, covering celebrity and entertainment news, from actual royals like Kate Middleton and Meghan Markle to Hollywood royalty, like Katie Holmes and Chrissy Teigen.
This content is created and maintained by a third party, and imported onto this page to help users provide their email addresses. You may be able to find more information about this and similar content at piano.io
Advertisement - Continue Reading Below
More From Celebrity
Spice Girls Reunion Tour Might Feature Posh Spice
Prince Charles' Revealing Joke About the Throne
Advertisement - Continue Reading Below
Some People Think Prince Harry Sounds American Now
Prince Charles May Make Buckingham Palace a Museum
Chrissy's Daughter Luna Is Learning to Read
The Queen Spent a Night in Hospital
Kate and Will Made Emma Watson Crack Up
Blake Lively Called Out an Instagram Account
Khloé and Tristan Have "No Label" Right Now
Kate and Will Share Intimate Moments in New Photos