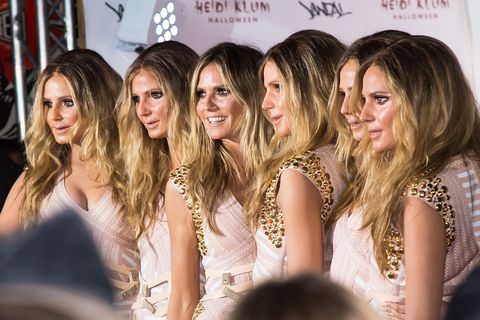 After weeks of teasing her fans with tiny hints, Heidi Klum finally revealed her latest Halloween costume when she arrived at her annual party late Monday night dressed as...herself...times six. Heidi's "costume" was an army of clones. Yay, our long national guessing game is finally over!

Even though you could tell right away which one was the real Heidi, the others in the Heidi girl gang were pretty convincing replicas (there's some Barbra Streisand in there too, I feel like?). After last year's hell of turning into an uncannily accurate Jessica Rabbit, Heidi more than deserved a break from all that transformation stuff, but to go from that to this?

Heidi is the Santa Claus of Halloween: She keeps you waiting, but then she completely blows your mind. Or maybe she's more like Buffy because of all the slayage. Anyway, it's frightening how forcefully the model has asserted her dominance over the holiday. From the year 2000 until now, no other celebrity has come close to embodying the Halloween tradition of dress-up like Heidi.

The big question with Heidi is always, Can she outdo herself yet again? The jury's still out on this one. Heidi's usually so good about looking nothing like herself that this almost feels like a letdown.

"It's going to be a German theme," Heidi revealed to Vanity Fair last Thursday. "My costume is going to be made in Germany. It's been in planning for four months." (German theme = Heidi is German = I guess this hint makes sense.)

One quick commenter immediately pointed out that Heidi wasn't the first to come up with this idea. Beyoncé did it years ago—with 300 clones, not six.

(Is it just me or is all the shade making it chilly in here?)

Back in early October, Heidi previewed part of her costume, saying that it was her first fitting. She wore thigh-high suede stiletto boots (a trademark at Heidi Halloween) and the sexy short-sleeve bodysuit she would eventually wear on Halloween. Commenters guessed she might be planning to dress as Beyoncé, the robot from the 1927 film Metropolis, a Kardashian-Jenner, or Barbarella. (But also, check out those weeping chandeliers.)

On Monday, Heidi appeared on the Halloween episode of The Ellen DeGeneres Show dressed as the dancing Maddie Ziegler to Ellen's singing Sia. Heidi kept it simple, wearing just a tan bathing suit from the Heidi Klum Swim line and a black-and-white wig.

Happy Halloween from @theellenshow and I 😘

She really went for it while dancing to "Cheap Thrills," but this stripped-down costume was actually more of a clue into what she would wear to her party on Monday than anyone would have thought.

Here's How "Heidi" Got Ready

"Happy Halloween, everyone!" Heidi said in an Instagram video on Monday afternoon. "It's that time of the year again! So let's get this party started." *Kiss*

Lets get this party started #heidihalloween

Heidi regularly subjects herself to long hours in the makeup chair on Halloween, and it seemed as though this year wouldn't an exception. She showed video of *someone* getting lots and lots of prosthetic application with makeup artists Mike Marino and Mike Fontaine.

There's a human eyeball underneath all that makeup:

"This is going to be the best costume you've ever worn," says Mike Marino in another Instagram video. "I'm so excited. I can't wait to do this four more times," suggesting so slyly that Heidi will be appearing as more than one thing/person at once. "Human centipede!!!!!" one commenter guessed.

Heidi begged her makeup artist Linda Hay, "Please make me pretty!" Maybe what she meant was, "Please make the person pretending to be me look as pretty as me!"

She gave a speed tour of an array of prosthetics.

And getting tons of false eyelashes applied:

Look at all the bedazzled bodysuits:

At least one thing's for sure: Heidi still put a crazy lot of work into this one, even without doing much dressing up herself. That's Heidi for you! She's always been go big or go home.

STORY BY HELIN JUNG Helin Jung is a writer and editor based in Los Angeles.
Advertisement - Continue Reading Below
More From Celebrity
Prince Harry and Meghan Markle's 53 Cutest Moments
RiRi Was Shocked by the Reaction to Fenty Beauty
Advertisement - Continue Reading Below
Behold: Celebrities Who Dated Normals
Kate Middleton & Michelle Obama Use This $64 Cream
A Full Timeline of Tyler C. & Hannah B.
Blake and Ryan Donate $400K to NY Hospitals
Prince William May Work as an Air Ambulance Pilot
Harry Is Likely to Get U.S. Diplomatic Status
Harry Was Forced to Give Up His Military Titles
Ariana Grande Revealed Her Natural Curls