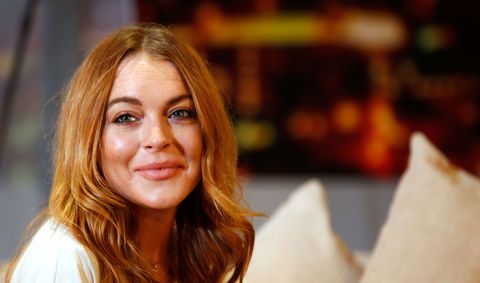 Lindsay Lohan gained some valuable experience trying out different accents from the age of 11 when she went (half-) British in Parent Trap.

And now 19 years later, she's going all experimental again and, in an interview Tuesday, showed off a, shall we say, different style of speech? Except this time it isn't for any role that we're aware of—apart from the performance that is Lilo's life these days, that is.

The actress was in Athens talking to the press and seemed to be taking on some kind of Greek-American-Vague-European-Twang hybrid. Listen below:

Her new voice is "a mixture of most of the languages I can understand or am trying to learn, Lindsay told The Daily Mail, adding a checklist of her inspirations: "I'm fluent in English and French, can understand Russian, and am learning Turkish, Italian and Arabic." She then tweeted that it deserves a name of its own and, sure, why not?!

Anyway, while Lindsay was full of praise for Athens during that particular interview, she wasn't feeling the love as much when she was launching her new club night, LOHAN, there.

She became increasingly frustrated when the crowd wouldn't quit yabbering to listen to her make a speech and ended up repeatedly telling them to "shut the f**k up." When they surprisingly didn't respond well to such instructions, she resorted to good old-fashioned librarian-style shushing.

Advertisement - Continue Reading Below
More From Celebrity
Sel on Healing After Justin Emotionally Abused Her
Bey & Jay Were the Cutest at the Roc Nation Brunch
Advertisement - Continue Reading Below
Prince William Just Got a New Royal Title
Chrissy Solved a Mystery With a Dolly Parton Post
Harry Felt Constrained by Royal Duties Growing Up
Er, Meghan and Kate Haven't Spoken Since Megxit
Why Harry and Meghan Should Keep Their Protections
Taylor Swift Explains Why She Loves Joe Alwyn
Real Humans Justin & Jessica Are Going to Therapy
Why the Queen Canceled One of Her Annual Events