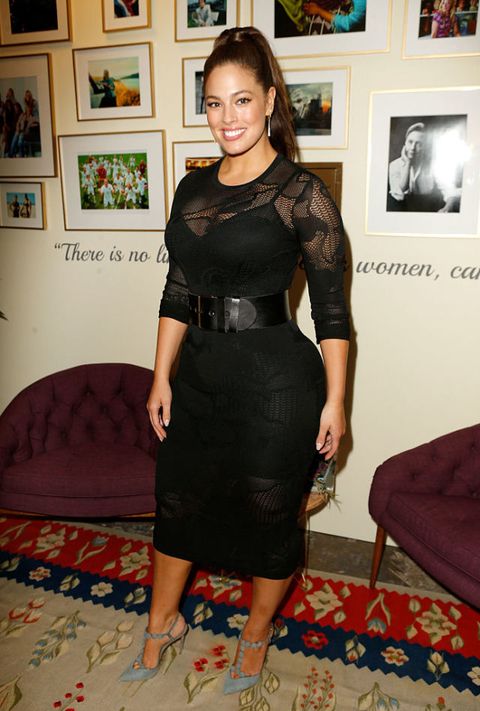 To have a Barbie made in your honor is a childhood fantasy. For Ashley Graham, that dream just came true.

As part of an effort to represent women of all sizes, Barbie manufacturer Mattel has unveiled a doll based on the 29-year-old model. It's the latest in a long list of accolades for Graham, who was the first size 16 model to star on Sports Illustrated earlier this year.

Obviously, there was one specification the toy company had to fulfill.

"She had to have her thighs touch," Graham told The Hollywood Reporter. "No ands, ifs or buts about it. And I asked for cellulite but obviously plastic and cellulite don't go hand in hand. It was important that the Barbie resembled me as much as possible. The thighs touching was one way to show young girls that it's okay for your thighs to touch, despite society saying that a 'thigh gap' is more beautiful."

As for the clothes, Graham was inspired by an outfit she has worn herself; a sparkly Opening Ceremony dress, a Sonia Rykiel jacket, and Pierre Hardy boots. And yep, she looks incredible.

Come on @Barbie, let's go party!!! 💗Thank you to my new and incredible @Mattel family for this honor! #beautybeyondsize #barbie #curvybarbie #ashleygrahambarbie

It's a positive step from Mattel, which comes after the company revealed Barbie's new petite, tall and curvy body types in January. Graham is hopeful that this change to the iconic doll, which has faced criticism for its unrealistic appearance in the past, will help to encourage body acceptance among young girls today.

"Now every girl does look like Barbie," she explained. "It's not an unattainable thing. Now, they can say, 'That's my Barbie. I look like that one.'"