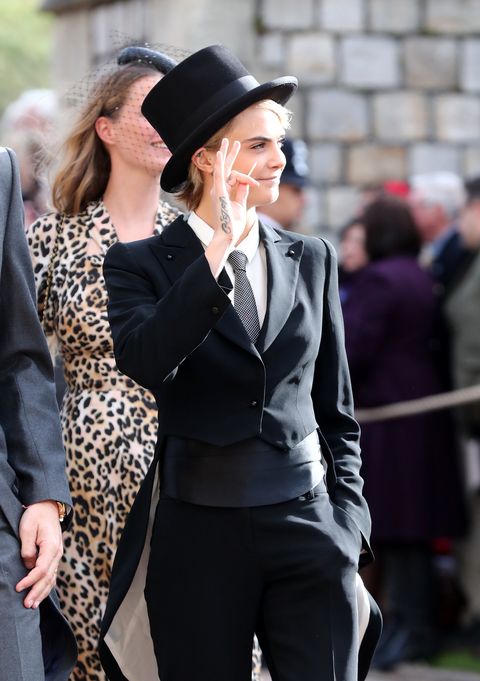 On Friday, royals and celebrities alike turned out for 2018's second royal wedding. Royal Wedding 2.0 saw Princess Eugenie of York marry Jack Brooksbank in a lavish ceremony at St. George's Chapel in Windsor — the same place Prince Harry and Meghan Markle tied the knot during Royal Wedding 1.0 in May.

The guest list for the biggest wedding of the season include several royals, of course. Prince William and Kate Middleton attended and even engaged in some rare PDA, presumably because ~love~ was in the air.

Two of the Duke and Duchess of Cambridge's children, Prince George and Princess Charlotte, were even in the wedding — as a pageboy and bridesmaid, respectively.

Prince Harry and Meghan Markle were also in attendance, returning to their own wedding venue.

As was Eugenie's grandmother, Her Majesty, Queen Elizabeth II and her grandfather, Prince Philip, who was rumored to be skipping the wedding at one point.

The ceremony was gorgeous, obviously, but what about Princess Eugenie's wedding reception? Well, we know that it was quite a party. Several of the celebrity guests broke the usual social media ban in place at royal weddings and shared snaps from inside the romantic reception.

But it wasn't just romantic. It was also LIT AF, apparently. Some guests posted pictures from the party bus that shuttled them from the ceremony to the reception:

And we know it was a boozy event, complete with lots of tequila.

Guests are still recovering from the reception, especially Cara Delevingne, who shared a picture of her post-wedding collapse, snapped by none other than fellow wedding guest Liv Tyler.

If the mark of a good party is the next day impact on guests, Eugenie's wedding gets a gold star.

Related Stories
Eugenie and Jack's Wedding Party Got Pretty Wild
Princess Eugenie Didn't Change Into a Party Dress
Kayleigh Roberts Contributor Kayleigh Roberts is the weekend editor at Marie Claire, covering celebrity and entertainment news, from actual royals like Kate Middleton and Meghan Markle to Hollywood royalty, like Katie Holmes and Chrissy Teigen.
This content is created and maintained by a third party, and imported onto this page to help users provide their email addresses. You may be able to find more information about this and similar content at piano.io
Advertisement - Continue Reading Below
More From The Ultimate Guide to the Royal Family
Why Will & Kate Wouldn't Hang Out With Harry
The Queen Has a Collection of Dog Toys for Sale
Advertisement - Continue Reading Below
Meghan Revealed the Nod to Diana in 'The Bench'
Will Spent Father's Day with George and Charlotte
Charles Won't Allow Archie to Become a Prince
Prince Charles Cant Deal with Harry's Criticisms
Meghan and Diana Had Similar Issues with the Queen
The Queen Insisted on Cutting a Cake with a Sword
Harry Texted Kate, Not Will, When Lili Was Born
Kate's Kids Want Her to Stop Taking Their Pictures