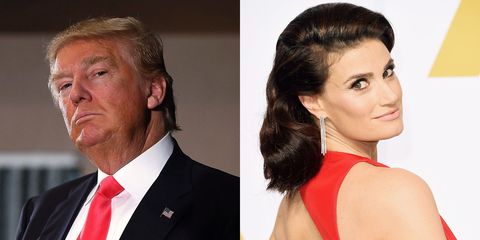 Donald Trump is having trouble lining up musical performers for his inauguration — I guess Scott Baio can't sing?! — and he's apparently gone to begging celebs and offering ambassadorships, fancy diplomatic posts, for singers and bookers who'll join him on January 20th. But still no takers?! Why, I wonder???

"I think it's karma, baby," the voice of Elsa from Frozen told Vanity Fair. "I mean, look: All the artists in the world got up and tried to get our girl [Hillary Clinton] elected, and it still didn't happen, so we're all still trying to recover from that."

Idina suggested that if Melania's husband couldn't find anyone to sing at his little party, that maybe he might do it himself? "Maybe he'll just have to sing something himself. He probably thinks he has a great voice; he thinks he does everything great."

I am now putting a prayer into the universe that the Donald sings at his own inauguration. It would be the only reason to tune in. (Or maybe he could get Alec Baldwin — he's such a fan of his work!)