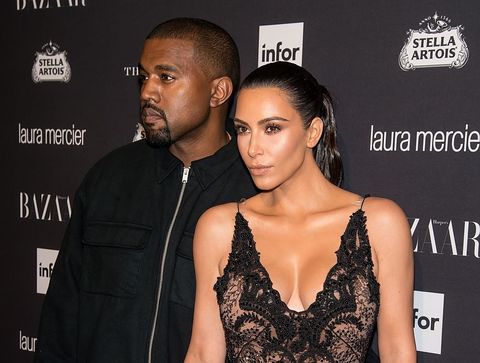 Following months of rumors that Kim Kardashian and Kanye West have been having marriage troubles, E! News now reports that the reality star was spotted in a rare post-robbery public appearance on Saturday night, minus one key piece of jewelry: her engagement ring.

As the source points out, prior to her terrifying Paris robbery, Kim was almost never without her engagement ring—but since, she's never been photographed while wearing it. This could, in part, be due to previous reports that Kim blamed herself for being too "flashy" prior to the robbery, and so she's decided to keep her jewelry to a minimum when in public just to feel safer. This theory also makes sense given that the most expensive piece of jewelry stolen from Kim during the robbery was a 20-carat diamond ring meant to be an "upgrade" to her original 15-carat engagement ring.

But given the rollercoaster that Kimye has been on lately, it's equally possible Kim's choice not to wear her engagement ring is a sign that the two are on the rocks—or, at least, that they're just taking some time to work through what a hectic and scary couple months it's been for both of them.