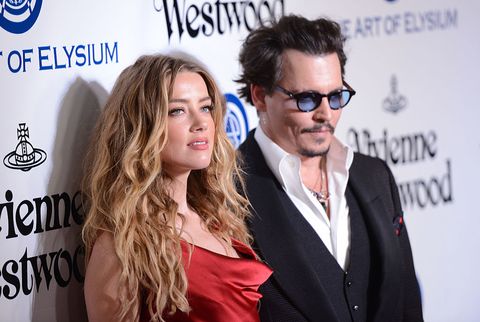 Amber Heard and Johnny Depp's divorce proceedings appear to be nowhere near finalised. After the actor accused Amber of using their divorce as way to "extend her fifteen minutes of fame," multiple reports also claim he has asked for $100,000 (£82,460) in legal fees.

Following the setbacks, Heard has responded by saying her estranged husband is delaying the procedure as a way of "punishing" her.

"Johnny and his counsel seem to wish to prolong this proceeding as a means of punishing me," Heard is reported to have said in documents obtained by E! News.

"I am now told that Johnny is taking outrageous steps of seeking legal fees from me because I have asked the court to enforce the settlement agreement that we reached four months ago," she said. "I am told that Johnny somehow claims I am the one who is delaying settlement rather than the other way around. These claims are contemptible and shocking."

Amber also revealed she is only focused on one thing; ending the divorce settlement.

"Johnny has delayed the resolutions of this matter," she added. "I want my life back. I want to be divorced from Johnny now."

The hold-up comes after the former couple agreed to a $7 million settlement back in August. Amber requested that the entire sum should be donated to charities, but after she claimed Johnny had only contributed a small portion of the full amount, she reportedly filed a Request for Order with the Los Angeles Superior Court in an attempt to fast-track the settlement proceedings. Now that Johnny has responded with his fee payment request, it doesn't look like this legal battle will be easily resolved.

A court hearing on Johnny's request for legal fee payment has been scheduled for 13th January, 2017.

This content is created and maintained by a third party, and imported onto this page to help users provide their email addresses. You may be able to find more information about this and similar content at piano.io
Advertisement - Continue Reading Below
More From Celebrity
Courteney Cox Said the 'Friends' Fountain Was Grim
Meghan Wins Copyright Claim Over Letter to Father
Advertisement - Continue Reading Below
The Royals Wish Archie a Happy Second Birthday
Charles Is Reportedly “Aggrieved” With Harry
Adele Stuns in Rare Birthday Photo Dump
Serena and Olympia Twinned in Swimsuits Again
Joe Jonas Opens Up About Parenting Daughter Willa
Kourtney & Travis Have Talked About Marriage
Meghan's Author Bio Includes the Sweetest Detail
46 Moments That Changed the Royal Family Forever