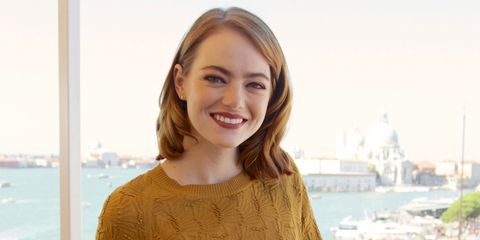 Emma Stone sings The Sound of Music when she introduces herself to strangers.

At least, that's the impression I get on walking into the room as she's in the middle of warbling the chorus of 'Do-Re-Mi.'

Whether the 28-year-old finds crooning musical numbers a normal way to greet people is up for debate. It is, however, a very Emma Stone character trait.

Fresh from touching down in London after a whirlwind week, that's seen her bag a Golden Globe for Best Actress in a Motion Picture in Los Angeles and walk the red carpet in Paris just 14 hours before, a jet-lagged Stone would be forgiven for falling asleep mid-conversation. Kind of.

During our interview, however, Emma is enthusiastic, breaking into her a broadway-stage smile on several occasions when discussing Ryan Gosling, her latest film La La Land, rejection and her sore feet.

Here's what we found out from Golden Globe-winning actress:

Starring opposite Gosling in the hit musical-comedy drama, it must get pretty boring having to answer questions about her co-star 24/7. For Emma, it could be worse.

"My friends don't ask about Ryan Gosling every day. It's mostly in interviews which makes sense so I don't mind talking about [him]," she jokes.

It's reassuring to hear. After all, the pair have starred in an impressive three feature films together to date (Crazy Stupid Love, Gangster Squad, and La La Land), resulting in several comparisons to famous Hollywood duo Humphrey Bogart and Lauren Bacall.

In the past, Stone has joked her longtime friend and recurring co-star to be "bloodthirsty and vengeful"—jarring adjectives for a guy who recently thanked the mother of his two daughters, Eva Mendes, in his Golden Globes acceptance speech, for holding down the fort while he filmed La La Land.

For us mere mortals, what's the best way to get on Gosling's good side?

"He loves Twizzlers. He used to eat so many on set it was concerning. He had them in his suit pocket. Bring him some Twizzlers if you want to get on his good side," suggests the star.

On picking yourself up after rejection

In La La Land, Emma plays the role of Mia—an aspiring actress pinballing between her boring barista job to dead-end auditions. That is until she meets snarky, jazz diehard pianist Seb (played by Gosling) who breaks her misfortunate spell.

For Stone, Mia's string of endless auditions sitting alongside carbon copy actresses, being interrupted mid-monologue and receiving rejection calls is an experience she knows all too well.

In an interview with the Daily Telegraph, she recently described one addition, revealing: "When I was 16, a casting director screamed at me, went ballistic when I didn't know my lines, 30 seconds after I got the script. Being in an audition room is... unique," she said.

So, how did she get over rejection as a young actress in Hollywood?

She replies truthfully: "You've just got to keep trucking."

Thinking back to filming Mia's failed auditions scenes, Emma explains it was a "cathartic experience" to draw on her own experiences of having doors slammed in her face. Metaphorically, we hope.

[Ryan] loves Twizzlers. He used to eat so many on set it was concerning.

"In the years of auditioning and feeling how Mia is feeling, it's nice to have it turned into something productive. Every actor can relate to those feelings," she said.

On her twinkle toes

While purging her own memories of audition knock-backs might sounds depressing, one thing Emma did enjoy was the opportunity to refine her dance skills—a talent that was recently put to the test when she channelled the Beyoncé 'Single Ladies' routine on The Ellen Show.

However, Emma is quick to assure me she looked more like a toddler than Ginger Rogers in the early stages of training for the film.

"We had three months which was an amazing amount of time to learn how to dance like a child in tap class. It was so much fun. I beat up my feet […] but it was worth it."

She can say that again.

On the evolution of Hollywood

Over the weekend, La La Land broke the record for the most Golden Globe Awards, winning seven prizes for every award it was nominated for, including best musical or comedy film, best director, screenplay, score and song.

We had three months which was an amazing amount of time to learn how to dance like a child in tap class.

The film also saw Emma and Ryan picking up awards in two acting categories and is now tipped for Oscar glory, after such unprecedented success for a musical.

It's safe to La La Land successfully straddles the border between the modern day and the timeless, marrying director Damien Chazelle's dream of creating a musical inspired by traditional French and American filmmaking during the Golden Age and bringing it into the 21st Century.

It was this creative ambition that drew Emma to the role.

"I would've loved to be around for Hollywood's Golden Age," she admits as we discuss the changing nature of Hollywood. However, contrary to classic musicals such as Singing in the Rain and Top Hat, Stone is happy actors aren't confined to the 'studio system' anymore.

"It's increasingly rare to shoot on film and have dance numbers, […] so it was fun to pay homage to the [Golden Age] era," she adds.

During her acceptance speech at the Golden Globes last week, Emma described La La Land as "a film for dreamers."

"I think that hope and creativity are two of the most important things in the world," she told the audience, who gave her a standing-ovation on the night.

So, what's on her bucket list at the moment? An Oscar? A five star, well-deserved holiday in the Maldives? "I really need to learn how to cook. That's a bucket list situation," she jokes.