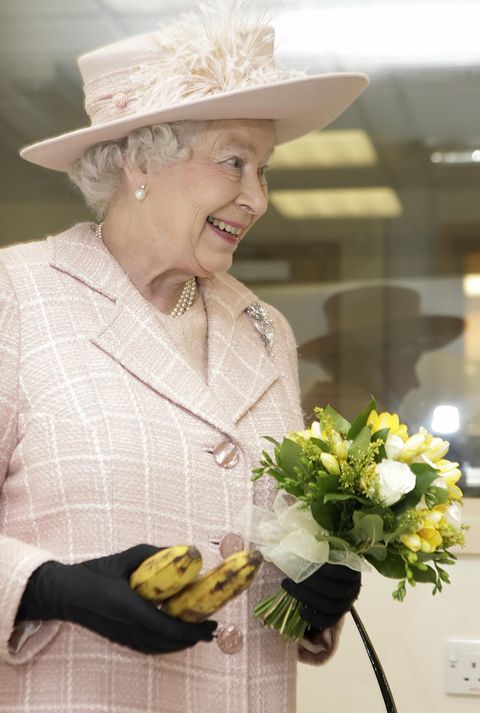 The royals have some rather...interesting culinary habits. Prince Charles refuses to eat lunch, but enjoys a boiled egg every morning cooked for four minutes, no more and no less. Prince Phillip steers clear of organic foods. Meghan Markle swears by Açaí bowls, and includes them in her daily breakfast routine.

But the family's most interesting eater is definitely the Queen. Her favorite food is dark chocolate, she refuses to eat garlic, and she's been known to chow down on fruit from a plastic yellow Tupperware container.

But the way she eats bananas is probably her most, um, unique culinary choice. TBH we weren't aware there was a way to eat a banana besides good old-fashioned peeling and chomping down. But, of course, Queen Elizabeth II found a way.

According to a former royal chef, she eats the fruit with a knife and fork in order to avoid looking "like a monkey."

Her unconventional technique was first revealed by palace chef Darren McGrady, who wrote the book Eating Royally in 2007, and he confirmed it this week to INSIDER.

McGrady explains that the Queen cuts off the top and bottom, slices through the skin lengthways to allow easy removal, chops the fruit into small pieces, and eats them with a fork.

According to INSIDER, the chef said that when she's not at lavish state dinners, the Queen obeys a "no starch" rule, avoiding foods like "potatoes, rice, or pasta" for dinner.

But bananas, high in fiber and full of nutrients, are fair game—as long as they're properly cut, of course.

In other royal banana news, here's a cute pic of the Queen feeding the fruit to an elephant last year at a zoo just outside of London.