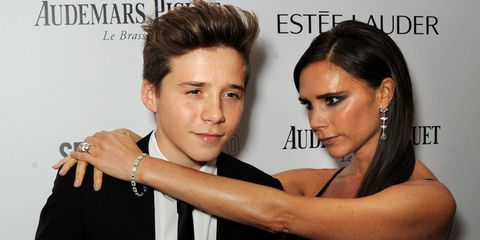 You guys, I think Victoria and David Beckham might be really good parents! (And we all know it's the public's opinion that counts.)

Wonderland magazine has an interview with 17-year-old Brooklyn Beckham, who revealed that he didn't know his parents were famous until he was a teen.

"I didn't actually know that they [his family] were big until I was about 13," he said, recalling the moment he figured it out. "I went to a football game and people were shouting my dad's name and I was like, 'What?! Oh my God. I don't look at them like that.'"

Considering my parents broke down and told me the truth about Santa Claus when I was 10 years old, I'm very impressed with their secret keeping abilities.

Not totally related, but: this weekend, Brooklyn and his whole family went to the snow, and he broke his collar bone! But don't worry; he's fine. Thankfully he has a great support system to help him get through it. (If the Beckhams are taking applications for adoptions; I want in!)

Laura Beck Laura Beck is a Los Angeles-based TV writer and frequent contributor to Cosmopolitan.com — her work has appeared in the New York Times, New Yorker, Jezebel, and the Village Voice.
This content is created and maintained by a third party, and imported onto this page to help users provide their email addresses. You may be able to find more information about this and similar content at piano.io
Advertisement - Continue Reading Below
More From Celebrity
Chrissy Teigen Shared a Sweet Video With Luna
EmRata Displayed Her Bump in an Open Button-Down
Advertisement - Continue Reading Below
Harry Sent a Legal Warning Over "False" Article
Chrissy Teigen Talked About Her Baby Loss Photos
Chrissy Teigen Opens Up About Her Loss
A Look Back at Gwen Stefani & Blake Shelton's Love
Serena Williams Shows Off Toned Body In BTS Photos
See a Romantic New Photo from Beatrice's Wedding
Harry Was Treated as a "Spare" by the Royals
Cardi B Called Out Racist Reactions to Her Birkins