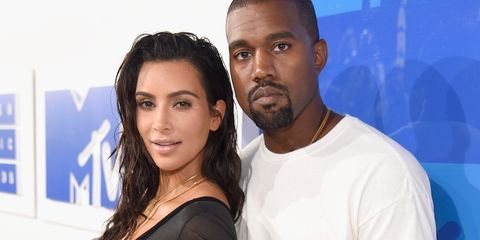 Bad news for North West, who likes to pretend her two other siblings don't exist: her parents Kim Kardashian and Kanye West are reportedly expecting their fourth child via surrogate, multiple sources have told Us Weekly. A source told the outlet that the baby, a boy, is due to arrive “in very early May." This will be West and Kardashian's second child welcomed through a surrogate. Chicago West, their youngest daughter, was born via surrogate on January 15, 2018.

The couple has two other children: North, of course, and Saint West. After difficult births with North and Saint, Kardashian was advised by doctors not to have any more natural pregnancies because it could be life-threatening for her since she suffered from placenta accreta during the deliveries of her first two babies.

Kimye was first rumored to be planning to have their fourth child soon in August. Kardashian shot down the tabloid rumors then: "I don't know, I don't know, I read that, I read something...none of that was true," Kardashian said, giving a blanket denial rather than specific one. "But I've been really open about it and talked about it on our show, so...I don't know. We start filming season 16 next week, so if I think about it more and it's gonna happen, you'll definitely see it on the show. But as of now, no."

Kardashian had conflicting feelings in the past about having any more children. The star spoke to ELLE last year about how she was torn about baby #4. "I dunno," she said then with a sigh. "My home and my heart feel really full right now, in the best way." She made it clear that the couple's fourth child would be their last. "I don't think I could handle more than that," she said. "My time is spread really thin. And I think it's important that in all couples, the mom gives the husband as much attention as the kids."

Alyssa Bailey News and Strategy Editor Alyssa Bailey is the news and strategy editor at ELLE.com, where she oversees coverage of celebrities and royals (particularly Meghan Markle and Kate Middleton).
This content is created and maintained by a third party, and imported onto this page to help users provide their email addresses. You may be able to find more information about this and similar content at piano.io
Advertisement - Continue Reading Below
More From Celebrity
Keep an Eye on Lady Louise Windsor
Princess Beatrice's Daughter May Get a Royal Title
Advertisement - Continue Reading Below
James Middleton’s Wife Thought He Was a Waiter
Meghan Markle Got a New Nickname
Harry Said the Queen and Philip Were "Adorable"
Kate Middleton Played Tennis With Emma Raducanu
Tom Felton Collapsed on a Golf Course
Ashley Olsen Made a Rare Red Carpet Appearance
Harry Carries Briefcase That Reads "Archie's Papa"
Meghan Markle and Prince Harry Arrive in NYC