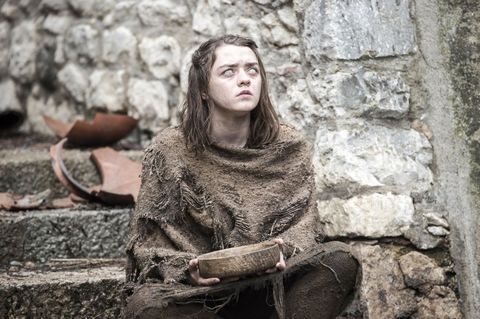 Today, Game of Thrones showrunners David Benioff and D.B. Weiss, along with Sophie Turner and Maisie Williams, took the stage for a panel at the South by Southwest Film Festival in Austin, Texas to talk about the hit show's final two seasons. And honestly, it's about time. It feels like we've been waiting forever for new information about the show and now we finally have it. Here's everything you need to know from the panel.

1. Season 8 will officially only have six episodes.

"It's only going to be six episodes for the final season," Benioff confirmed, according to Entertainment Weekly. "From the beginning we've wanted to tell a 70-hour movie. It will turn out to be a 73-hour movie, but it's stayed relatively the same of having the beginning, middle and now we're coming to the end. It would have been really tough if we lost any core cast members along the way, I'm very happy we've kept everyone and we get to finish it the way we want to."

2. Benioff and Weiss won't return for any Game of Thrones sequel or prequel series.

"I think HBO might well do [another series] and I look forward to watching it and I think it be great, but I think they should get new blood in," Benioff said, according to Entertainment Weekly.

Why? Because Maisie Williams is a fan and Benioff and Weiss are the best.

"For years we were trying to get Ed Sheeran on the show to surprise Maisie and this year we finally did it," Benioff said.

4. Maisie Williams' Arya Stark was the hardest character to cast.

The more you know, right? When asked which character was the hardest to cast, the showrunners admitted freely that it was Arya Stark, played by Maisie Williams.

5. And the producers are big fans of Sansa.

"I always loved Sansa because she's like a real person…," Benioff said, according to Metro. "A lot of us were annoying teenagers at one point."

6. The worst scene of Game of Thrones ever was in the pilot—and it was cut.

According to EW, the producers pointed to a very specific, very embarrassingly-shirtless scene from the pilot as the worst of the series. It was so bad, in fact, that it was cut.

"There's a scene in the pilot that might be the worst scene we've ever written with the Stark boys and Jon Snow and then and they're all shaving each other, getting their haircut, and they were all shirtless — it was really weird… if you look closely you could tell they were all flexing."

Just kidding. Probably. During the panel, the showrunners talked about the process of divvying up the episodes for the final season and Benioff quipped, "We argued over who got to kill Sansa."

But, TBH, the fact that he even said that probably means Sansa is safer than any other Thrones character left.

Game of Thrones season 7 premieres on HBO on July 16.

Kayleigh Roberts Kayleigh Roberts is the weekend editor at Marie Claire, covering celebrity and entertainment news, from actual royals like Kate Middleton and Meghan Markle to Hollywood royalty, like Katie Holmes and Chrissy Teigen.
This content is created and maintained by a third party, and imported onto this page to help users provide their email addresses. You may be able to find more information about this and similar content at piano.io
Advertisement - Continue Reading Below
More From Celebrity
Did Taylor Admit She's Engaged to Joe Alwyn?
Bieber Fully Shut Down a Jelena Troll on Instagram
Advertisement - Continue Reading Below
The Queen Is Mourning the Loss of Her Dog
Kate Beckinsale Shows Abs In Bikini Video
Natalie Portman Reacts to Hemsworth's Muscles
The Scooter Braun Dig in Ryan Reynolds' New Ad
Eugenie Shopped at Kate's Favorite Maternity Store
J.Lo's Ex Told Her to Get Botox at 23
Miley Said She and Liam Had "Too Much Conflict"
Prince Charles' Life in Photos