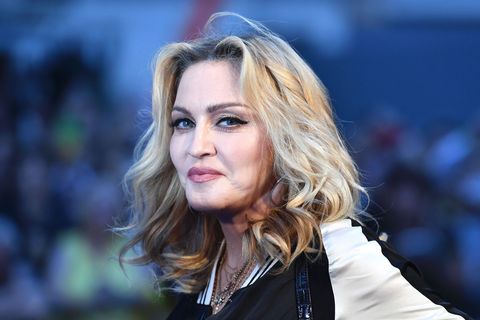 Pepsi's now-pulled ad featuring Kendall Jenner in a pseudo-protest has drawn plenty of criticism. The latest comes from Madonna, who herself starred in a Pepsi ad back in 1989.

"When you wake up and realize that shit just really doesn't make sense!" she wrote on Instagram, captioning a video of Kendall's commercial, "Side note: my Pepsi commercial was pulled 30 years ago because I was kissing a black saint! #ironic"

The kiss she refers to is actually from the controversial music video for "Like A Prayer," which debuted after her commercial but was mistakenly associated as part of the Pepsi ad. The Vatican condemned the video for its use of religious symbols (burning crosses, sexualizing a saint), and religious groups threatened to boycott Pepsi products. In the end, Madonna lost her Pepsi sponsorship contract.

Madonna also posted a photo of herself holding a Coca Cola can at the 1999 Grammy Awards. It features a closeup of the label so her message comes across loud and clear:

A lot of the criticism for Kendall's Pepsi ad revolved around the fact that it co-opts very real resistance movements and seemingly sends the message Pepsi can fix it all. It's worth noting Madonna was one of the speakers of the Women's March back in January, during which she gave a passionate speech:

"To our detractors that insist that this March will never add up to anything, fuck you. Fuck you. It is the beginning of much needed change. Change that will require sacrifice, people. Change that will require many of us to make different choices in our lives, but this is the hallmark of revolution. So my question to you today is are you ready? I said, are you ready? Say yes, we are ready. Say, yes we are ready. One more time: you're ready.

Kristina Rodulfo Beauty Director Kristina Rodulfo is the Beauty Director of Women's Health—she oversees beauty coverage across print and digital and is an expert in product testing, identifying trends, and exploring the intersections of beauty, wellness, and culture.
This content is created and maintained by a third party, and imported onto this page to help users provide their email addresses. You may be able to find more information about this and similar content at piano.io
Advertisement - Continue Reading Below
More From Celebrity
Jennifer Lopez and Ben Affleck: Everything We Know
Harry & Oprah's Mental Health Doc Has a Title
Advertisement - Continue Reading Below
Serena Williams Might Miss the Tokyo Olympics
Jennifer and Ben Have "Unreal" Chemistry Together
The Sussexes Marked Archie's Bday in a Lovely Way
Queen's Cousin Accused of Selling Access to Putin
Meghan Wore a Meaningful Necklace for Vax Live
How Celebrities Are Celebrating Mother's Day 2021
Gabrielle and Kaavia's Mother's Day Pic is So Cute
Ben Affleck's Moving Tribute to Jennifer Garner