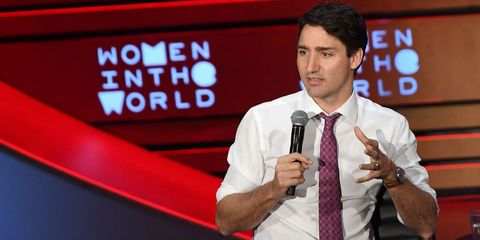 Self-proclaimed feminist Justin Trudeau spoke at the annual Women in the World Summit in New York this morning, providing us with even more reasons to fall in love with him. The Canadian Prime Minister, who boasts a completely gender-balanced cabinet and pledged $650 million for reproductive health on International Women's Day opened up about why he's a feminist and what the world needs to do for more women to be in leadership roles.

Margaret and Justin Trudeau in 1972.

On how his mother influenced him to be a feminist:

"What's interesting is over the course of my political career—people say it less now—they used to say, 'Oh, he's just his mother's son,' as a way of dismissing me. And every time, I said, 'Oh yes, thank you. I am so proud of that.'

My mom right now is traveling across Canada and even [other] parts of the world to talk about de-stigmatizing mental health. She struggled with depression, with bipolarity all her life, was misdiagnosed, was marginalized, particularly in the political years with my father, and her strength and her sense of justice and her brilliance has shown through as a mother all her life, and finally she's being able to share the world with her books and with her stories, and I am just so incredibly proud to be her son."

On having a gender-balanced cabinet:

"One of the things that we've done and focused on—and not just because it's the right thing to do, but because it makes good, economic sense, is figuring out how to put more women in leadership roles; how to make more women successful in business, as entrepreneurs.

Because not only do you make more success for those companies and organizations, but it changes the types of conversations that leaders are having, and having a gender-balanced cabinet has been something that has led to a level of depth of conversation and an approach to solving problems that, quite frankly, leads you to a much better place and a much better way of sharing with citizens that yes, we are allaying these fears that we understand, but that we know we can overcome together."

On how he promoted women to run for office in Canada:

"We had a program where we emailed out to all our contacts across the country—supporters and interested people—"Ask her to run," where we asked a woman to ask another woman to run for office, to step up. Because we know you have to ask a few times before a woman says, yes, she'll run for office.

On how he and his wife Sophie Gregoire Trudeau are raising their kids to be feminists:

"We have two sons and a daughter, and I'm like, 'Yes, I'm gonna focus on making sure that my daughter understands that she can be anything, there should be no barriers, she should be able to be successful and as proud of a feminist as she possibly can.'

"Sophie said, 'Yes. And what are you going to tell your sons?' I said, 'Okay, I will also tell my sons to be feminists and that their sister can do anything she wants.' We can't just talk about how women need to be empowered without talking to the people who, unfairly, still have more power: the men. The men have to be part of the solution."

On how businesses should add female executives to their boards:

"When you actually start seeing boards go from saying, 'Oh we're getting a lot of public pressure. We should really appoint a few women to the board,' to saying, 'Oh my God, we really need to appoint women to the board because we need better quality of decisions, we're having trouble with our growth, we need to reach out to understand the market better and understand our motivation better'— these are the kinds of things that matter."

On empowering women in the workplace:

"When we realize that including women and promoting women to positions of power isn't just a nice thing to do, it's the smartest possible thing do to, you start connecting it to more meaningful ways to the workplace."

When women have the same opportunities as men, we all benefit. Good talk with @TinaBrownLM at #WITW on the economic benefits of equality. pic.twitter.com/wmVf8mtMdb

On why he donated $650 million for women's reproductive health:

Watch the full segment below, and prepare to swoon: