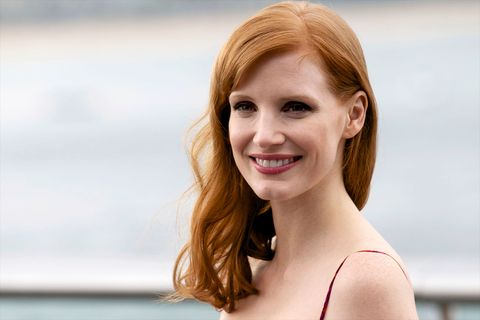 Jessica Chastain is an advocate for gender equality in Hollywood, and has now revealed how she makes sure she gets paid the same as her male counterparts.

The Dark Zero Thirty star told Variety: "I'm not taking jobs anymore where I'm getting paid a quarter of what the male costar is being paid. I'm not allowing that in my life. What I do now, when I'm taking on a film, I always ask about the fairness of the pay. I ask what they're offering me in comparison to the guy."

The actress admitted that in the past when she was offered a film role, producers wouldn't let her sign on it until they had secured a male lead and knew how much budget they'd have left over to pay her.

"In the past, what I used to do—this is terrible—a movie would come to me with an offer," she said. "They wouldn't want me to do my deal until they cast the male actor. They would wait and see what they had left over, even if they'd come to me first. And so I stopped doing that. Now, if someone comes to me and has an offer but wants to wait, I'm like, 'Goodbye.' If you want me in your film, do a favored-nation clause. Don't determine my worth based on what's left over."

She also disclosed that she lost out on a big film role recently after initially turning it down due to the pay disparity between the male and female cast members.

"There was something huge that I recently turned down," she went on. "For me, it wasn't about the money; it was an old-fashioned problem of the wage gap. I turned it down, and they didn't come back. I remember afterwards I was like, 'What did I do? Maybe it was a mistake.' But it wasn't, because everyone in the studio system heard what I did...Even though I lost that film, I've created a boundary. I drew a line in the sand. The power of 'no' means you're educating people in how to treat you."

This content is created and maintained by a third party, and imported onto this page to help users provide their email addresses. You may be able to find more information about this and similar content at piano.io
Advertisement - Continue Reading Below
More From Celebrity
Gigi Shared the Sweetest Photo of Zayn and Khai
Meghan Shared the Cutest Update About Archie
Advertisement - Continue Reading Below
Meghan's Heartfelt Father's Day Gift for Harry
Sophie Turner Shared a Sweet Unseen Pregnancy Snap
The Queen Has a Collection of Dog Toys for Sale
Meghan Revealed the Nod to Diana in 'The Bench'
Celebs Are Posting Tons of Father's Day Tributes
Will Spent Father's Day with George and Charlotte
Charles Won't Allow Archie to Become a Prince
Royals Had Several Talks About Archie's Skin Color