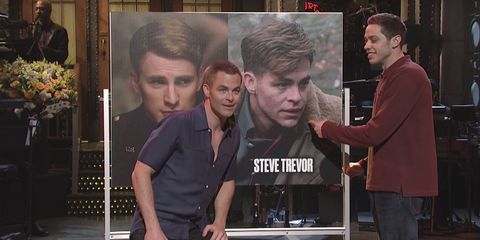 Chris Pine hosted Saturday Night Live for the first time, and he definitely enjoyed the experience. His opening monologue was perfect for so many reasons, not least because he delivered the majority of it in song. But, most importantly, Pine asked fans to stop confusing him with other famous actors called Chris, of which there are many.

Having announced that he was promoting his new movie, Guardians of the Galaxy Vol. 2, which received the loudest cheer, Pine enlisted the help of Leslie Jones. Pine asked Jones to tell the audience who he was, to which she replied, "You're Captain America, Chris Evans." So Pine broke into a special song.

With a handy chart wheeled in behind him, Pine proceeded to explain that he wasn't Chris Evans, Pratt, or Hemsworth. With lyrics like "I'm not that Chris. I look just like him, but I'm not that Chris," it was clear that Pine found it amusing how often he got confused with other actors.

Trying to explain that although his character in Wonder Woman, Steve Trevor, has the same first name as Captain America, they are different people. The man that wheeled in the photo board said he thought it was a photo of Ryan Reynolds.

Sure, some Hollywood actors look a little alike, but luckily we have Chris Pine's SNL song to clear things up.

Amy Mackelden Weekend Editor Amy Mackelden is the Weekend Editor at HarpersBAZAAR.com, where she writes about entertainment, celebrity news, beauty, and fashion.
This content is created and maintained by a third party, and imported onto this page to help users provide their email addresses. You may be able to find more information about this and similar content at piano.io
Advertisement - Continue Reading Below
More From Celebrity
Miley Cyrus Asked Out a Woman on TikTok
Charles and Camilla Restrict Comments on Twitter
Advertisement - Continue Reading Below
The Queen Is Hiring a New Personal Assistant
Harry Was Mistaken for a Christmas Tree Salesman
Sophie Turner Shared Never-Before-Seen Pics on IG
Did Taylor Admit She's Engaged to Joe Alwyn?
Bieber Fully Shut Down a Jelena Troll on Instagram
The Queen Is Mourning the Loss of Her Dog
Kate Beckinsale Shows Abs In Bikini Video
Natalie Portman Reacts to Hemsworth's Muscles