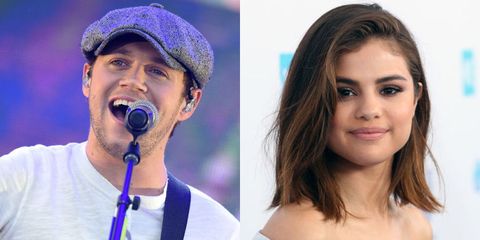 Remember when Niall Horan (the blonde, Irish guy from One Direction) and Selena Gomez were a ~rumored~ couple? And then remember when Selena quickly put those rumors to rest by publicly friendzoning Niall during an interview?

When asked about the rumored relationship by Entertainment Tonight in 2015, Selena shut things down completely. "Oh my god! No," she said, laughing. "I love him, I always have. He's amazing."

Even though Niall and Selena (Nelena? Siall?) were never actually a thing, Niall has admitted to crushing on the "Bad Liar" singer—but way, way back in the day, before their rumored love connection in 2015.

In a new interview with SiriusXM, Niall was asked about his earliest celebrity crushes.

So, sadly for anyone who ships this pairing (if anyone even does?), Niall and Selena's romance doesn't seem to go any further than a childhood crush.

Kayleigh Roberts Kayleigh Roberts is the weekend editor at Marie Claire, covering celebrity and entertainment news, from actual royals like Kate Middleton and Meghan Markle to Hollywood royalty, like Katie Holmes and Chrissy Teigen.
This content is created and maintained by a third party, and imported onto this page to help users provide their email addresses. You may be able to find more information about this and similar content at piano.io
Advertisement - Continue Reading Below
More From Celebrity
See the Royals Socialize at a 1991 Cocktail Party
Eugenie's Pics from Inside Harry and Meghan's Home
Advertisement - Continue Reading Below
Queen Trolled Tourists Who Didn't Recognize Her
Blake and Ryan Recreated Their First Date on IG
Charles Expertly Ignored Boris Johnson's Snafu
How Kitty Spencer's Wedding Dress Honored Diana
Dolly Parton On the #FreeBritney Movement
Will & Kate Are Nervous About George's Future
George Won't Be Forced to Go to Boarding School
Diana Would Have Written a Memoir Too, Friend Says