A really awful video of Miley Cyrus being physically groped by a random stranger has surfaced online, and it's upsetting to say the least. In the video, Miley and her husband Liam Hemsworth can be seen leaving their hotel in Barcelona, Spain, where they had to walk through an extremely packed group of fans to get to their car.

The video—which is currently making its way around Twitter—may be triggering, so we won't embed it here. But in the footage, Miley walks behind Liam when a man starts grabbing her hair and body, and then eventually attempts to kiss her. Miley can be seen trying to get away before security guards realize what's going on and quickly separate her from the man. Meanwhile, Liam also realizes something's up and reaches back to put his arm around Miley.

This wildly inappropriate behavior is obviously 100 percent never ever ever okay, and it's awful that Miley—or any woman, celebrity or not—would have to deal with something like this. As of now, Miley hasn't commented on this incident on any of her social media channels, and she's busy promoting her new EP "She Is Coming," which we should all listen to right away because it freakin' rules. 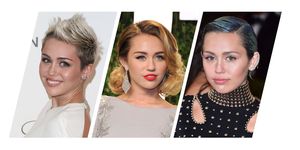