Because the world tends to be a sexist place, when the news broke last night that Bradley Cooper and Irina Shayk had split after four years together, people tended to assume that he was the one who broke up with her. Welp, turns out they were wrong!

A source just spoke with Entertainment Tonight and said she was the one who felt like it was time to call it a day on the relationship.

“Recently, Irina decided enough is enough. She didn’t feel she was getting the level of commitment she wanted and the endless fighting made their life unbearable,” the source said. “They are very different people, and once they realized it was the baby that was holding them together, it was time to call it quits.”

“Some of their friends feel they never truly got a chance to know each other outside of being a family, and it was just all too much too fast.”

Apparently, they had been unhappy in the relationship for quite some time. They almost split up during the release of A Star Is Born but were “advised against it” because of the potential the breakup had to overshadow the movie’s release.

When the press tour for the movie was over, Irina thought they’d get a chance to repair their relationship, but it didn’t work out how she’d planned.

“Irina truly had high hopes for their future together and felt once the baby was born they would find the time to marry but that never came to fruition,” the source said. “She wanted more from Bradley in every way. But she was unhappy and felt he spent too much time working.”

Gotta respect a woman who knows what she needs.

Related Stories
The 33 Best Irina Shayk Looks of All Time 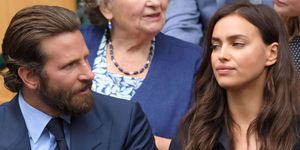 Emma Baty Emma Baty is the Associate Entertainment Editor at Cosmopolitan who focuses on movies and TV.
This content is created and maintained by a third party, and imported onto this page to help users provide their email addresses. You may be able to find more information about this and similar content at piano.io
Advertisement - Continue Reading Below
More From Celebrity
What Happens on Katie's Season?
Jennifer Lopez Wears Old Bracelet From Ben Affleck
Advertisement - Continue Reading Below
Simone Biles Cheers on MyKayla Skinner
See the Royals Socialize at a 1991 Cocktail Party
Eugenie's Pics from Inside Harry and Meghan's Home
Queen Trolled Tourists Who Didn't Recognize Her
Blake and Ryan Recreated Their First Date on IG
Charles Expertly Ignored Boris Johnson's Snafu
How Kitty Spencer's Wedding Dress Honored Diana
Dolly Parton On the #FreeBritney Movement