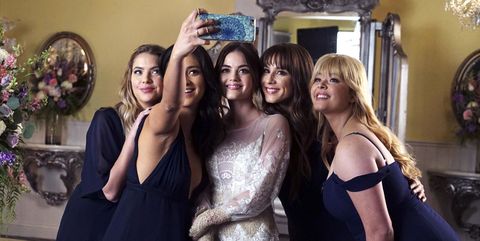 Those of you expecting big twists and turns in the Pretty Little Liars finale may be relieved to FINALLY know who Uber A is, what fan theories ended up coming true, and what exactly has been going on in Rosewood all this time. Here are five things you need to know about the show's shocking Uber A reveal.

1. Uber A turned out to be portrayed by none other than series regular Troian Bellisario.

Troian played Spencer Hastings/Alex Drake, the latter of whom turned out to be Uber A. So basically, all of those fan #Twincer theories were not just true but the truth. And now that the cat's out of the bag, Troian's speaking out about her two-faced role, which is good because we NEED answers.

In an interview with Elle, the actress finally opened up about the weirdness of the show's ending, as well as how it actually feels to say that she's Uber A after all, out loud:

"It's so unnerving! It feels so weird talking about it. Like, 'Oh God, am I going to get into trouble?'"

2. Troian actually found out that she'd be Uber A a couple of seasons ago.

In the same interview, Troian revealed that she found out she'd be playing Uber A way back at the beginning of season five, directly from PLL mastermind/showrunner I. Marlene King.

[Showrunner I. Marlene King] took me aside and told me, 'I have an idea, but I don't know if the network will let me do it...' Then she sat me down and explained this whole ending to me. She said, 'You cannot tell anybody. It might not even happen.' So I sat on it for over a year. Then at the end of season six, she said, 'We're going to do it.' It was like the starting gun at the races."

3. Uber A was not planned from the beginning of the show.

The original A was just going to be Charlotte, until the network decided to expand the show to seven seasons, and King wrote in a whole new universe of characters (and one villain) to explore:

"Originally, the show was only supposed to last five years. So she was going to take it through to Charlotte being revealed as A, and that was it. But around season four, the network contacted her and said they really wanted to take the show through to seven seasons. That's when she had to start creating this whole other world, with a new ultimate villain. By the time she let me in on it, she had been thinking about it for at least a full year and had really fleshed it out. Over the next two years, we got to build it together."

The best way to keep this big spoilery secret? By being jokingly upfront about it:

"It's been real rough. But for a long time, people would ask, 'Who's A.D.?' And I'd say, 'It's me!' And everyone would just laugh. It's kind of great when you have a secret that so few people—only me, Marlene, and a handful of others at that point—know. It means you can hide in plain sight."

5. Troian's realistic about the fact that this reveal will be polarizing to fans of the series.

She said she knows that some fans will take the whole Spencer twin reveal as a "slap upside the head," but that she doesn't think all fans were surprised by the reveal—but that figuring things out early is actually part of the fun.

"For other people, it'll be fun to feel ahead of the game. It doesn't take the fun out of the mystery. It makes you feel like you're a part of it."