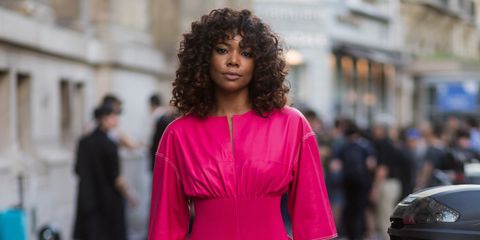 When Gabrielle Union and Dwyane Wade rolled up to men's fashion week in Paris looking actually flawless, the Internet obviously freaked out. Who else could pull off bermuda shorts like that?!

As half of one of the fittest celebrity couples, Gabrielle Union defies all aging odds—you'd never guess she was 44. Girl looks exactly the same as in her "Bring It On" days! So, we did some sleuthing to figure out what it is she's eating to look so dang good.

Drink All The Water

When talking to Women's Health about how she keeps her skin looking so amazing, Union said this: "I drink a lot of water, I don't smoke, and I don't have a hard life." Since her mid-thirties, she's been drinking a gallon a day; usually, it's just plain ol' tap, but sometimes she'll add lemon. "It's just important to get the water in," she told Fitness Magazine. "If you can replace sugary drinks, or coffee, with water, you're still ahead of the game."

Union told UsWeekly that her diet includes at least two servings of leafy greens every day, like lettuce, spinach, kale, and swiss chard.

Don't Be Afraid to Splurge

Union is alll about the cheat days—and going hard at the gym to balance it out. Let's be honest, we wouldn't pass up this peach cobbler doughnut bread pudding either. "If I want cupcakes, cookies, or a short stack, I don't deny myself," she told Fitness Magazine. "And I certainly don't deny myself bacon!"

Can you say, cheat day!😂 For today's #foodiefriday @chefrli shares his recipe for Peach Cobbler Doughnut Bread Pudding with Caramel Sauce. This is why I workout so hard people!!

Union posts tons of #FoodieFriday pictures on Instagram (made by personal chef Richard Ingraham), from eggplant cannolis to apricot and champagne cola barbecue ribs. Cooking obviously gives you more control over what goes into your body, so even though you'll probably have to do it yourself, cook up a few easy meals this week.

In honor of my recent Italian adventures, tonight’s #FoodieFriday is a twist on an Italian pastry. Get in the kitchen and try @Chefrli’s receipe for an Eggplant Cannoli.

Go For Lean Meat and Fish

Most of Union's protein comes from lean meat and fish. Take a look at her Insta and you'll find pictures of crab, lobster, shrimp and sea bass. When she wants to indulge in something like a rib-eye steak, she'll keep her portions in check, eating 6 ounces instead of 12.

Here's the latest #FoodieFriday dish for you to salivate over this weekend. Grab a plate and treat yourself to some Pan Seared Sea Bass, Cinnamon Roasted Butternut Squash Purée with Roasted Asparagus and Ginger Ponzu Butter!