At least three Skarsgård brothers came out to play Tuesday at the Hollywood premiere of It, which stars Bill Skarsgård as Pennywise. You know what's scarier than clowns? Nothing. Not even all the scary faces Bill's brother Alexander tried to make on the red carpet while posing for photos. Their brother Gustaf was also on the carpet but he left all the scary-face-making to Alexander, who failed miserably at trying to make the star of the evening uncomfortable. See? 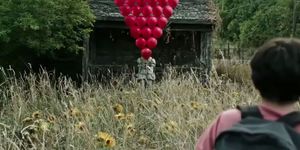 2. "Oooooh, clowns! Scary!" —Alexander "Stop it. Gustaf and I regret inviting you." —Bill

8. "I'm channeling my inner clown. Is this funny?" —Alexander "I'm so proud of this guy! Not you Alex, just Bill." —Gustaf

10. "I really nailed the sweater vest look...remind me to thank my stylist later." —Bill

12. "I forgot to unplug the kettle, you guys, I'll see you at the after-party." —Alexander

It opens Friday. It might be a good idea to have these photos handy so you can look at them after spending a couple of hours in the dark with a clown.