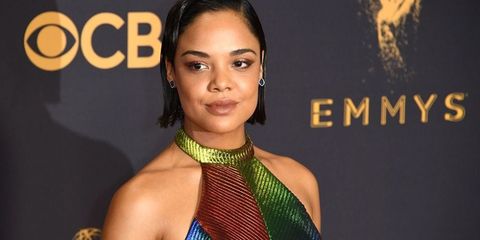 One of the best parts of the Emmys red carpet is watching out for spoilers during those generally bland pre-ceremony interviews. Tessa Thompson, who plays the high-powered Charlotte Hale in Westworld, dropped a tantalizing hint about Season 2 of the HBO drama.

"The next season feels really like 'The future is female,'" Thompson told ET this evening.

Creators Jonah Nolan and Lisa Joy have described Season 2 as "twice as ambitious" as the first, delving into the question of "what's really happening in this place?" The new season will air in 2018.

Emma Dibdin Contributor Emma Dibdin writes about television, movies, and podcasts, with coverage including opinion essays, news posts, episodic reviews and in-depth interviews with creatives.
Advertisement - Continue Reading Below
More From The Emmys 2020
What Everyone Wore to the Emmys After-Parties
Blake Paid Tribute to Leighton During the Emmys
Advertisement - Continue Reading Below
Patricia Arquette Makes a Plea for Trans Rights
The Emmys Were All About the Light Blue Dress
Twitter Is Obsessed with Zendaya's Emmys Dress
Alex Borstein Tells Women to "Step Out of Line'
What Emilia Wore to the Emmys
It's Valentine's Day on the Emmys Red Carpet
Gwendoline Christie Looks Like Jesus at the Emmys
Wait, Is Taylor Swift at the 2019 Emmys?