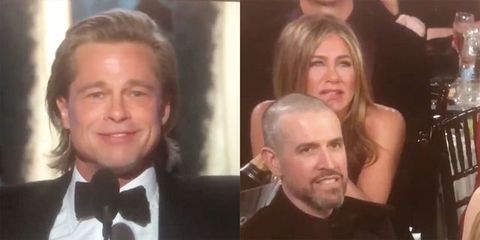 A glorious thing happened tonight at the Golden Globes: Brad Pitt won the award for Best Performance by an Actor in a Supporting Role in Any Motion Picture. And the camera gave a very generous glimpse of his ex-wife Jennifer Aniston's expression throughout his acceptance speech.

There were pursed lips:

There was the moment she whispered something to Reese Witherspoon and had a bit of a laugh:

And the knowing (and slightly pained) smirk she gave when Pitt quipped, "I wanted to bring my mom [to the Globes] but I couldn’t because any woman I stand next to they say I’m dating." The camera focused on her the entire time Pitt made that remark.

Go ahead, take it all in:

Pitt and Aniston could still have a photo op later in the night. Pitt wants it to happen. He talked to Entertainment Tonight about it on the Golden Globes' red carpet. "I'll run into Jen, she's a good friend," he said, making a little joke about everyone's thirst for the moment. "The second most important reunion of her year? I understand," he added, clarifying, "That was a play on Friends. They were saying that." Pitt, of course, is referring to reports that the Friends cast is in talk to do a reunion special on HBO Max.

Aniston spoke to People in December and made it clear nothing was confirmed regarding the Friends reunion. When asked about the potential special, Aniston said she knew “nothing. And I will just continue with… we’re trying. It’s a never ending question, isn’t it? What else could make a group of six actors feel more proud. It’s bringing people joy on a daily basis.”

As for what Aniston and Pitt's relationship is like now? Pitt wasn't exaggerating. They really are friends. Pitt attended Aniston's holiday party last month and was the second to last person to leave. And Us Weekly reported on Christmas that the two still have a little spark. “Brad and Jen have a wonderful connection that might seem flirtatious at times,” a source told the outlet. “They dig each other’s sense of humor and have an infectious energy when they’re together, but they insist things are purely platonic and nothing more than that.”

Alyssa Bailey News and Strategy Editor Alyssa Bailey is the news and strategy editor at ELLE.com, where she oversees coverage of celebrities and royals (particularly Meghan Markle and Kate Middleton).
This content is created and maintained by a third party, and imported onto this page to help users provide their email addresses. You may be able to find more information about this and similar content at piano.io
Advertisement - Continue Reading Below
More From Celebrity
Gigi Hadid Apparently Gave Birth on a Farm
Harry & Meghan Want to Go Back to the UK This Year
Advertisement - Continue Reading Below
Adele Shares Previously Unseen Photos on Instagram
Duchess Kate & Prince William Share New Photos
Kit Harington and Rose Leslie Are Expecting
The Queen Is Apparently an Anti-Foodie
Katie Holmes Just Met Her New BF's Parents
Harry Looked Regretful During Time 100 Interview
The Queen's Dining Room Has a Secret Button
Why Demi Lovato Broke Off Her Engagement