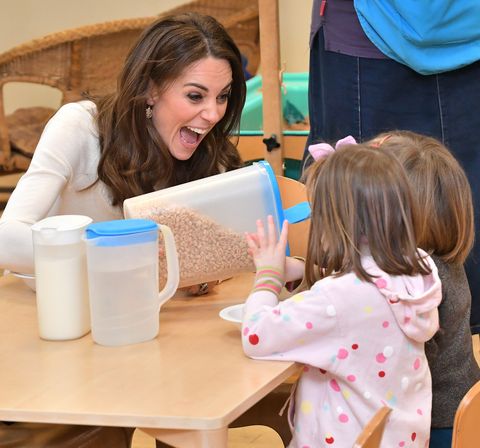 Earlier this month, Kate Middleton launched a British survey into early childhood development, named "5 Big Questions on the Under 5s." To promote the survey, she's undertaking a solo tour of the U.K., making stops at the Ely and Careau Children’s Centre in Cardiff, Wales, women's prison HMP Send in Surrey, England, as well as the interactive children's activity MiniBrum at the Birmingham Science Museum. On Wednesday, she visited the LEYF (London Early Years Foundation) Stockwell Gardens Nursery & Pre-school, as People reports, where she helped serve kindergarteners breakfast.

Kate visited the preschool in order to draw attention to childhood nutrition (specifically, a good breakfast—hence her early morning arrival). According to People, she spoke to staff and children at the nursery, as well as members of the LEYF Early Years Chef Academy, which trains chefs in creating nutritious food for under 8s.

The "5 Big Questions on the Under 5s" survey comprises—as you've probably guessed from the title—five questions on how early experiences impact health and wellbeing in later life. Kelly Beaver of Ipsos MORI, the research company conducting the survey for the Royal Foundation, told the Independent, "The [survey] is a fantastic way for the British public to share their views about the importance of the early years."

A statement on the official Kensington Royal Instagram reads, "The survey is designed to bring together the thoughts of as many people across the UK as possible – recognising that everyone has a role in ensuring strong, healthy foundations for the youngest in our society that will positively affect their lifelong outcomes." The post continues, "5 Big Questions on the Under 5s aims to spark the biggest ever conversation on early childhood that will ultimately help bring about positive, lasting change for generations to come."

Related Stories
Kate Wore a Great Chevron Blouse to UK Event
I Need Kate Middleton's Leopard Print Skirt
Emily Dixon Emily Dixon is a British journalist who’s contributed to CNN, Teen Vogue, Time, Glamour, The Guardian, Wonderland, The Big Roundtable, Bust, and more, on everything from mental health to fashion to political activism to feminist zine collectives.
This content is created and maintained by a third party, and imported onto this page to help users provide their email addresses. You may be able to find more information about this and similar content at piano.io
Advertisement - Continue Reading Below
More From Celebrity
Hailey Wore a Nude Blazer and Micro Dress
Gabrielle's TikTok About Her Prom Date is So Funny
Advertisement - Continue Reading Below
Victoria Beckham Shuts Down 'Spice World 2' Rumors
Kendall Jenner Shared Her Experience of Anxiety
'The Voice' Star Blake Shelton Opens Up About Gwen
Sussexes Share New Birthday Photo of Archie
Charles Is Still Upset Over Harry's Oprah Tell-All
Meghan and Harry Share New Archie Photo
The Cambridges Share Their First Full YouTube Vid
Courteney Cox Said the 'Friends' Fountain Was Grim