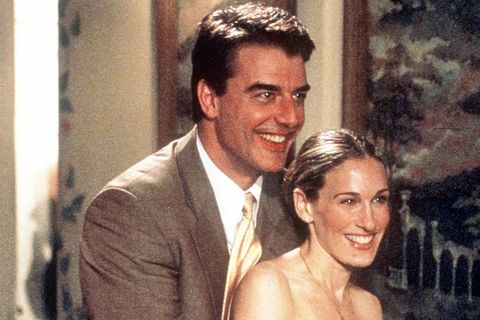 "We always had a wonderful time working on SATC, and I know he has the greatest affection for Sarah Jessica Parker as an actress and a friend," King continued. "To take his comment any other way would be a 'Big' mistake."

Jennifer Hudson sparked rumors of a Sex and the City threequel, and Sarah Jessica Parker and Kristin Davis added to the buzz on Twitter, everyone's favorite brunch-centric HBO series is a topic of conversation again. Which is why Australian outlet news.com.au decided to ask actor Chris Noth some SATC-themed questions while he was in the country on a publicity tour.

Though the site acknowledges that they were warned not talk Sex and the City during the interview since the Good Wife actor would likely be suffering from SATC fatigue after a long day of interviews, the outlet went for it anyway, going straight for the Big jugular. Which is perhaps why Noth's answers were so er, unpleasant. When asked if he was worried about being typecast after appearing in the cult series, the actor reportedly gave the following response:

It's funny, because even with 'The Good Wife' people accuse me of always playing powerful men. But they're flawed—Big was powerful because he had a lot of money and he seemed to have the upper hand in the relationship, but emotionally he was a wreck.

Actually, no: he was what he was. One of the things I tell people is that he never tried to pretend he was anything other than what he was. It was [Carrie] who tried to pretend he was something he wasn't. He was always honest about himself—he never cheated on her. The relationship just didn't work, and he went on to get married while she went on to…how many boyfriends did she have? She was such a whore! [laughs] There's a misconception that Carrie was a victim of him, and that's not the case—she was a strong, smart woman.

Now I feel like people see me as the Governor from 'The Good Wife,' and they want to stick me in that box…but that's fine. I'm not actively trying to break a mold; I'm just interested in good material.

Where to begin here? Whether Big and Carrie were good together or awful together but deserved each other (not to mention whether their relationship was a healthy model to present to millions of viewers)—has been debated on couches and on the Internet ad nauseum, so of course Noth has an opinion about it—and every right to discuss it. But to call Carrie Bradshaw a whore—even in jest—for having many boyfriends comes out of nowhere—and seems unnecessary, if not downright offensive. The show is about a woman and her relationships—with herself, her friends, and, yes, men. And what was so powerful about the series—which is called Sex and the City for Christ's sake—is that Carrie owns her actions, makes mistakes, and that made her relatable. She is the kind of woman who would be outraged by someone calling her a whore. And I hate to think what Miranda would have to say.

As a SATC fan, I agree with some of what Noth says: Carrie tried to pretend Big was something he wasn't and as a result, that relationship didn't work. I am forever Team Aidan, and when Carrie finally ended up with Big, I was disappointed. But it's Noth drawing a line distinguishing the two characters, Big as the guy who gets married (and eventually cheats on his wife with Carrie, but okay, fine, whatever) and Carrie who goes on to go through more boyfriends, I don't agree with. It's sexist. Sure, maybe it's all an attempt at a joke (Haha, "whore" doesn't always have to be pejorative, right? Mean Girls does the whole "Boo, you whore" thing, which is...an endearing put down? Nope, still doesn't really work...), but it's not very funny.

Noth does add one interesting piece of information in the interview. That Sex and the City 3 rumor might be, in his words, "bullshit":

Is there going to be another ['Sex and the City'] movie? The tweets! I can't believe those girls are tweeting, they're being very naughty. I don't go near Twitter, it's all bullshit. I'll believe it when they say 'Action!' and until then I don't pay any attention. Sure, I've heard rumors, but they've been sayin' that shit for 10 years. It'd be a great thing, but for now it's all just Tweety-pie shit.

Sally Holmes Editor in Chief Sally is the Editor in Chief of Marie Claire where she oversees coverage of all the things the Marie Claire reader wants to know about, including politics, beauty, fashion, and celebs.
This content is created and maintained by a third party, and imported onto this page to help users provide their email addresses. You may be able to find more information about this and similar content at piano.io
Advertisement - Continue Reading Below
More From Celebrity
Your Guide to the Current Royal Line of Succession
Watch Prince Harry's Interview with James Corden
Advertisement - Continue Reading Below
Meghan Has an Adorable Nickname for Harry
Harry Revealed Archie's Impressive First Word
Harry Said the Press Was Ruining His Mental Health
Here's Blue Modeling Icy Park Like a Pro
How Kate and Will Feel About the Sussex Oprah Chat
Selena Gomez Photographed Flipping Off Paparazzi
Serena Williams Stuns in a Glamorous Red Robe
Sophie Turner and Joe Jonas Took the Cutest Selfie