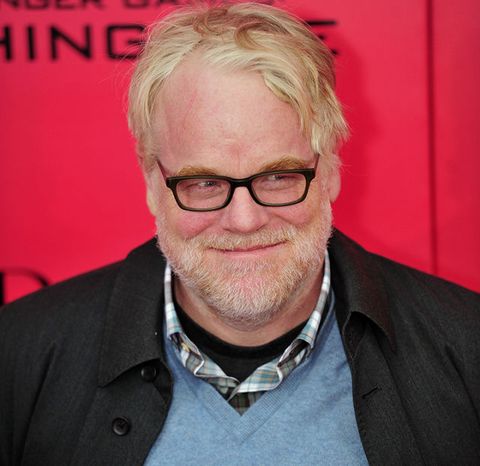 Philip Seymour Hoffman, one of the greatest actors of our time, died earlier today at his Manhattan apartment of an apparent drug overdose. He was just 46 years old. Celebrities took to Twitter to say their goodbyes, and it's beyond heartbreaking.

I am sad on so many levels about the loss of Philip Seymour Hoffman. One of the greats. Losing him this way is absolutely tragic. — Evan Rachel Wood (@evanrachelwood) February 2, 2014

Dear Philip, a beautiful beautiful soul. For the most sensitive among us the noise can be too much. Bless your heart. — Jim Carrey (@JimCarrey) February 2, 2014

We lost one of the greats today. Philip Seymour Hoffman RIP my friend. You will be missed always and forever. — Aaron Paul (@aaronpaul_8) February 2, 2014

Such shocking & sad news. RIP Philip Seymour Hoffman. One of the greatest actors of a generation and a sweet, funny & humble man. — Ricky Gervais (@rickygervais) February 2, 2014

Beautiful beautiful man. We have lost so much joy to something so joyless. RIP PSH. — Lena Dunham (@lenadunham) February 2, 2014

OH NO!!!!! Philip Seymour Hoffman has died. A truly kind, wonderful man and one of our greatest actors - ever — mia farrow (@MiaFarrow) February 2, 2014

Shocked to hear of Phillip Seymour Hoffman's death. If you missed him as Willy Loman, you missed a Willy Loman for all time. — Steve Martin (@SteveMartinToGo) February 2, 2014

Shocked, saddened by news of the brilliant PSH. His singing of 'I'm Gonna Get You On a Slow Boat to China' in The Master was perfection. — Judy Blume (@judyblume) February 2, 2014

PSH was one of the most wonderful people I ever knew. Please take away from this horror to get help if you need it. — Richard Lewis (@TheRichardLewis) February 2, 2014

"Sometimes I absolutely hate this job." -- The Grim Reaper, when Philip Seymour Hoffman's name showed up on his list. — Patton Oswalt (@pattonoswalt) February 2, 2014

Laura Beck Laura Beck is a Los Angeles-based TV writer and frequent contributor to Cosmopolitan.com — her work has appeared in the New York Times, New Yorker, Jezebel, and the Village Voice.
This content is created and maintained by a third party, and imported onto this page to help users provide their email addresses. You may be able to find more information about this and similar content at piano.io
Advertisement - Continue Reading Below
More From Celebrity
Meghan Markle Looked Gorgeous at Global Citizen
Harry and Meghan Are Taping Their NYC Trip
Advertisement - Continue Reading Below
Keep an Eye on Lady Louise Windsor
Princess Beatrice's Daughter May Get a Royal Title
James Middleton’s Wife Thought He Was a Waiter
Meghan Markle Got a New Nickname
Harry Said the Queen and Philip Were "Adorable"
Kate Middleton Played Tennis With Emma Raducanu
Tom Felton Collapsed on a Golf Course
Ashley Olsen Made a Rare Red Carpet Appearance