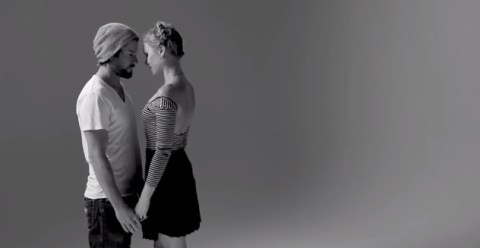 The seconds before a first kiss are equal parts exciting and excruciating, and filmmaker Tatia Pilieva captured the complexity of those moments in her short film First Kiss.

The artist asked 20 complete strangers to share a first kiss on camera—a concept that makes us feel anticipatory awkwardness more than anything else. But much to our surprise, the film was filled with moments romantic and odd, that together resulted in a beautiful portrayal of humans creating intimate moments with one another.

Nerves took over at certain times, which resulted in hysterical lines including, "What's your name again?" But it seems that it only takes a contrasty black and white film set to great music to transform those awkward utterances into charming quirks.

Advertisement - Continue Reading Below
More From Celebrity
Meghan & Harry's Trademark's Been Blocked for Now
Khloe Kardashian's House Has a Room for Extensions
Advertisement - Continue Reading Below
Katie Holmes Stuns in a White Oversize Coat
Taylor Swift Opens Up About Past Eating Disorder
Courteney Cox's 'Friends' Photo Has a Sweet Secret
Celebrities With Kids You Didn't Know About
People Think Prince Charles Ignored Mike Pence
Dolly Parton, Icon, Started a Viral Meme
Brad Responded to Those Photos With Jen
Meghan Markle Would Love to Be the Breadwinner