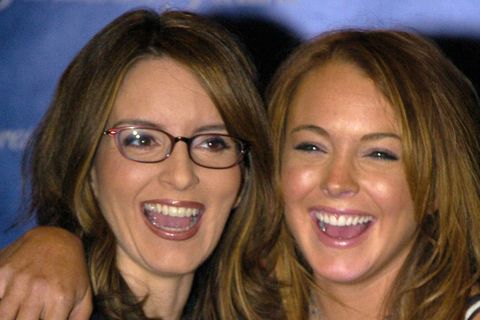 When Lindsay Lohan went on The Tonight Show last week, Jimmy Fallon doused her in the face with water, and it was awesome. But it wasn't the only highlight of the night: She also hinted at a Mean Girls sequel, telling Fallon: "When I was backstage I saw [Mean Girls writer] Tina [Fey], and she mentioned maybe doing some sort of reunion…She said she was talking to Lorne [Michaels] about it, she's talking to the big boss."

But it turns out Lindsay got the idea wrong, Tina Fey said last night on Access Hollywood, when asked about a possible reprise. "[There's] definitely not a movie. It's just the anniversary is coming up, so everybody get your pink shirts," she said, but then softened the sad news with a joke: "It's been 10 years. You can tell when you look at me it's been 10 years," she laughed.

And then she only got funnier, continuing: "'I said to her [Lindsay], 'Oh, I think someone may call us about doing some kind of reunion because next month is the tenth anniversary of the movie.' And so really... if everyone's around we might try to do some kind of, like, panel discussion. But it's not like- it's not another movie. At most, it would be like a panel discussion. With a plate of hot wings."

Lindsay Lohan, Rachel McAdams, Lizzy Caplan, Tina Fey, and that kid who played Damian eating a plate of hot wings in a corporate-y panel setting? Tina, you're amazing. (Which is exactly why we need you to write another Mean Girls.)

This content is created and maintained by a third party, and imported onto this page to help users provide their email addresses. You may be able to find more information about this and similar content at piano.io
Advertisement - Continue Reading Below
More From Celebrity
Jordyn Woods Talked About Being Publicly Shamed
Kate Middleton Stuns in a Sustainable Denim Dress
Advertisement - Continue Reading Below
Sophie Turner Shared Her Personal Pregnancy Pics
Gwyneth Paltrow Poses Nude on Her 48th Birthday
The Queen Fired a Nanny Who Tried to Overrule Her
Gigi Hadid Apparently Gave Birth on a Farm
Harry & Meghan Want to Go Back to the UK This Year
Adele Shares Previously Unseen Photos on Instagram
Duchess Kate & Prince William Share New Photos
Kit Harington and Rose Leslie Are Expecting