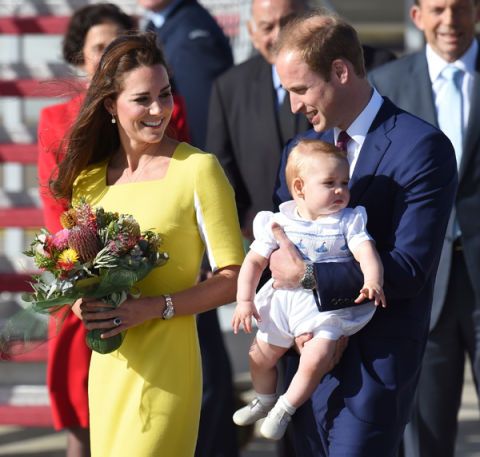 1. Prince William is apparently having some trouble with Kate Middleton's colorful wardrobe. After spending more than a week touring New Zealand, the royal family arrived in Sydney, Australia on Wednesday with a squirmy Prince George in tow. The duchess wore a structured yellow and white Roksanda Ilincic dress. According to a woman in Sydney who said she met and briefly spoke with Middleton, the duchess revealed that Prince William said she looked like a banana. Oh come on, Wills!

3. So science says that quarter-life crisis you may have had (or are currently experiencing) is actually kind of legitimate. According to a new study, cognitive decline begins after the age of 24! Researchers from Simon Fraser University in Canada found that the first dip in cognitive decline was a small one, but occurred around participants' age of 24. Every 15 years after, cognitive speed dropped by 15 percent. The silver lining - because there has to be one right now - is that your brain makes up for the cognitive slowness in other ways, so it's not all terrible.

4. Beyoncé and Jay Z might have just made your summer. According to venerable gossip section Page Six, sources confirmed to the paper that Beyoncé and Jay Z will tour together this summer. So naturally, we're reliving the four-minutes of glory that was Beyoncé and Jay Z's Grammy Awards opening. So. many. feelings.

5. Hillary and Chelsea Clinton want to hear from you. As part of the No Ceilings: The Full Participation Project, the Clinton women are hosting series of conversations meant to advance critical social discussions about the progress of women and girls around the world. One discussion is happening at the Lower East Side Girls Club in New York City tomorrow at 3:00 p.m. Everyone can participate through the livestream (make sure you RSVP!) or by tweeting questions with the hashtag, #noceilings.