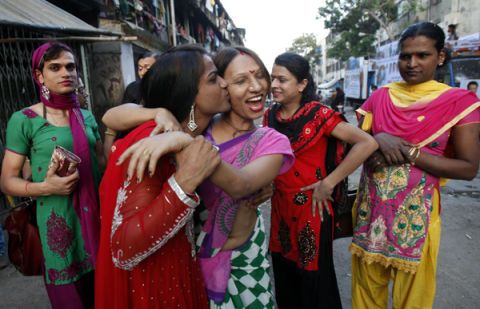 1. Transgender is now an official gender in India. "Transgenders are citizens of this country ... and recognition as a third gender is not a social or medical issue but a human rights issue," Justice K.S. Radhakrishnan of India's Supreme Court said of Tuesday's landmark ruling. Amnesty International praised India's court for its ruling while also calling for the country to amend its law banning sex between consenting individuals of the same gender.

2. The title of Fox News' new show featuring four female hosts says everything. The network's new noontime show will feature a panel of five hosts that includes only one man. The program is called "Outnumbered"—a seemingly ironic male-centric title for a show featuring mostly women.

3. You should follow Joe Biden on Instagram. He's only been a user for one day and look how he delivered!

Found a friend to join my first selfie on Instagram. Thanks for following and stay tuned. –VP

4. For the record—Kate Upton doesn't actually hate her boobs. The model and actress was quoted in an interview earlier this week saying that she wishes she had small boobs roughly twice a day.

Unfortunately, what was said about my body is completely made up to try and drum up controversy where there is none. Like every woman,

I have moments of insecurity, but I love and am proud of my body -- every part of it -- and wouldn't change a thing.

5. Thank you, democracy! Judge declares one of the most restrictive abortion bans in the country unconstitutional. North Dakota's proposed "Heartbeat Law" sought to restrict abortions once a heartbeat could be detected, which could happen as early as six weeks into a pregnancy. "The United States Supreme Court has spoken and has unequivocally said no state may deprive a woman of the choice to terminate her pregnancy at a point prior to viability," U.S. District Court Judge Daniel Hovland wrote. As it is, North Dakota has some of the harshest abortion laws in the country, with only one abortion provider in the entire state.