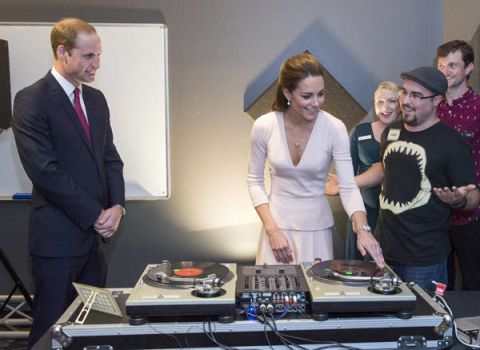 We're not speaking from experience, but we imagine that life as a royal, as privileged as it is, could sometimes be a tad, well, dull. Long formal dinners, dry converstaions, lots of waving—it's not exactly thrilling on a daily basis. However, the royal couple's Australian tour has proved to be quite an adventure, one that has even lead them to hitting the one's and two's.

Earlier today, Prince William and Kate Middleton (bedecked in a lovely pink Alexander McQueen look) tried their hand at DJing at a hip-hop school in Elizabeth. D.J. Shane Peterer gave them a lesson in scratching, during which each royal was endearingly awkward — Middleton even ended her set with a double thumbs up. Proving that they can never do wrong in our eyes, it makes us love them all the more.