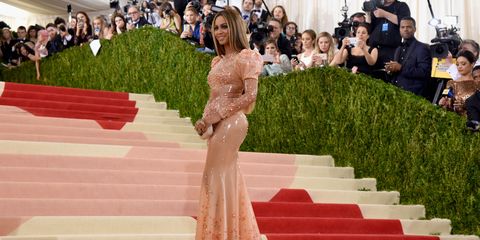 The Metropolitan Museum of Art's annual Costume Institute Gala is fashion prom on steroids. It attracts the biggest stars (in the biggest dresses) and usually yields a whole summer's worth of celebrity talking points. Here, highlights from the '70s to now.

2016: Taylor went short, maybe to match her short new hair. Not what we expected from the event's co-chair. (But we're on board.)

2016: While Sarah Jessica Parker tried something rare for the Met Gala: pants. Only SJP could pull that off.

2016: Kim is not one to disappoint (see: 2015). But Kayne tried ripped jeans and colored contacts on fashion's biggest night. We see you, Yeezy.

And then her Zac Posen gown lit up and we were like 🙌.

2016: Maybe Zoe Saldana was inspired by Rihanna's train from 2015. Saldana's is a lot less meme-able, but we're still impressed.

2015: When Beyoncé was late because she'd been busy doing her ponytail in the elevator.

2015: When Rihanna arrived in the Guo Pei dress that instantly launched a thousand memes. Pizza anyone?

How about some scrambled eggs?

Who needs a red carpet when you have a mile-long yellow train?

2015: When they tried to ban selfies but no one listened.

2015: When the new generation of supermodels decided to lounge on the Met steps.

2015: And runner-up for meme-worthy look of the night: Sarah Jessica Parker in her flaming headdress. The Internet went wild with this one...

2015: When Kim wore this sheer feathered Roberto Cavalli gown and everyone called out its not-so-subtle similarities to Beyoncé's Givenchy Haute Couture dress from 2012.

But actually they both copied Cher, who owned the look long before either of them, back in1974.

2015: When Cara Delevingne got temporarily tatted up.

2015: When Selena Gomez basically wore a full orchid plant on her head.

2015: When Jennifer Lawrence revealed she went through "45 or 46 fittings" prior to wearing this Dior dress.

2015: When this guy wanted to Instagram Beyoncé's fierceness but he also wanted pizza.

2015: When Kerry Washington looked straight out of a princess fairytale in a pale pink Prada ballgown.

2015: When Solange went futuristic in this sculptural Giles dress.

2015: When Diane Kruger proved pants can be just as chic as a gown in Chanel Couture. 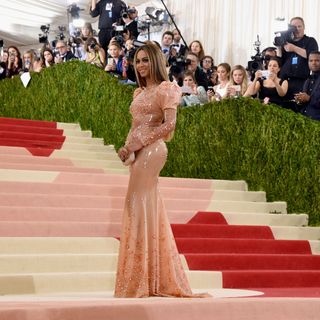