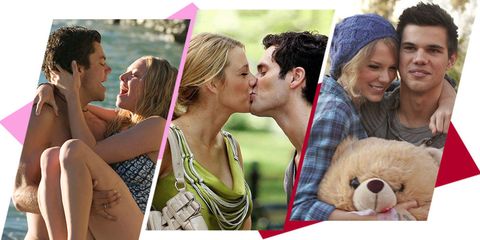 Life imitates art imitates...love? These celebrities may have been playing couples, but their relationships were anything but an act. From Rory and Jess to Serena and Dan, get ready for all the feels. Ahead, 50 on-screen couples who took their romance off-screen.

1 of 50
Jenna Dewan and Channing Tatum

Dewan and Tatum played love interests in the 2006 film, Step Up. They fell in love on-set and were engaged two years later, officially tying the knot in 2009. After nearly nine years of marriage, Dewan and Tatum announced they would be getting divorced via an Instagram post in April 2018. They have a 4-year-old daughter, Everly Tatum, together.

2 of 50
Ian Somerhalder and Nina Dobrev

The two play steamy vampire couple Damon and Elena on The Vampire Diaries and started dating in 2011 while filming the TV series. However, they ended their romance in May 2013. Somerhalder is now married to Nikki Reed, who recently gave birth to a baby girl.

3 of 50
Dominic Cooper and Amanda Seyfried

Seyfried dated her Mamma Mia! co-star for three years, but Cooper ended up breaking Seyfried's heart after he allegedly cheated on her. Seyfried admits falling in love on set is "one of the easiest things in the world. You're put in a situation where you have to make out with each other. It's easy for things to get carried away."

4 of 50
Nicole Kidman and Tom Cruise

Kidman and Cruise first met each other on set for the 1990 film, Days of Thunder. They got married the same year and lasted until their split in 2001.

5 of 50
Tom Cruise and Penelope Cruz

The pair were cruisin' towards each other while playing lovers on-set of the 2000 film Vanilla Sky. They started dating following Cruise's divorce to Kidman, but ended up splitting after three years.

6 of 50
Winona Ryder and Johnny Depp

Ryder and Depp dated for four years during the '90s and starred together in the 1990 film, Edward Scissorhands.

7 of 50
Matthew McConaughey and Penelope Cruz

Look 👏 at 👏 that 👏 passion. It's no wonder McConaughey and Cruz started dating during the 2005 thriller Sahara. However, they ended up splitting a year later.

8 of 50
Richard Burton and Elizabeth Taylor

Burton and Taylor met on the set of Cleopatra in the early '60s. They were both married at the time, but apparently they shared their first kiss on camera and continued said kiss even after the director called "cut." #Scandalous. They wed a few days before Taylor's divorce was finalized in 1964.

9 of 50
Miley Cyrus and Liam Hemsworth

Cyrus and Hemsworth met in 2009 on the set of The Last Song playing teenage lovers Ronnie and Will. (How can anyone forget the infamous "She Will Be Loved" scene?) The pair have had an on-and-off again relationship over the years (they were engaged in 2012 and broke it off September 2013), but made their debut as a newly engaged couple in 2016.

Hawn and Russell starred in the 1987 comedy Overboard, and have pretty much been inseparable ever since. They originally met on the 1968 set of The One and Only, Genuine, Original Family Band, but didn't start dating until over a decade later.

11 of 50
Courteney Cox and David Arquette

Cox and Arquette met on the set the 1996 thriller Scream and were married three years later in San Francisco. However, in 2010 they separated after 11 years of marriage. Cox reflects on her marriage, "I think you really need to work in a relationship, and I think that we tried. We're just really different, too. I'm the polar opposite of him."

Put Heard and Depp at the top of the "Absolutely Disastrous, Messy Relationships of All Time" list. The two played love interests while on set of The Rum Diary in 2009, but they didn't start dating until several years later. They were married in 2014, but Depp allegedly began sending Heard abusive text messages long before. In June 2015 they smuggled their dogs into Australia (casual), and in 2016 the pair finally split while ensuing a lengthy, public divorce trial.

13 of 50
Rachel Bilson and Hayden Christensen

The two started dating in 2008 after meeting on the set of their film Jumper. They got engaged that December, but called it off in August 2010. Bilson and Christensen reconciled three months later, but officially split in 2017. 💔 They have one daughter together, Briar Rose.

14 of 50
Blake Lively and Penn Badgley

Sorry, but we'll never get over these two. On-screen couple Serena and Dan AKA Lively and Badgley met on the set of Gossip Girl in 2007 and dated for three years. After they broke-up in 2010, they still had to film the show together. We imagine that might have made things just a tad awkward.

15 of 50
Michelle Williams and Heath Ledger

A tragic ending for these two. Williams and Ledger played longtime sweethearts in the 2005 Oscar-winning drama Brokeback Mountain. Later that year, Williams gave birth to their daughter Matilda Rose Ledger in October. However, Ledger passed away in 2008 following a drug overdose.

16 of 50
Andrew Garfield and Emma Stone

Garfield and Stone played love interests as Peter Parker and Gwen Stacy in The Amazing Spider-Man 2. They started dating in 2011 and broke up in 2015, though it's rumored the pair is back together.

17 of 50
Megan Mullally and Nick Offerman

Bet you didn't know these Parks and Rec co-stars are actually married (explains the totally real sexual tension between Tammy Swanson II and Ron Swanson). Offerman and Mullally have been married since 2003.

18 of 50
Jennifer Garner and Ben Affleck

RIP Ben and Jen. The two met on the set of the 2003 film Daredevil and divorced in 2015 after 10 years of marriage. He's now dating Saturday Night Live Producer Lindsay Shookus.

19 of 50
Sophia Bush and Austin Nichols

In May 2010, Bush confirmed she had been dating One Tree Hill co-star Austin Nichols (who plays her husband on the show) on and off for four years. The couple broke up in February 2012.

20 of 50
Jennifer Aniston and Vince Vaughn

Aniston and Vaughn began dating in the summer of 2005 while working on their movie The Break-Up. Turns out they actually did break up a year later.

21 of 50
Katie Holmes and Joshua Jackson

Holmes refers to Jackson as "my first love." The two played lovers throughout a complicated relationship in the teen drama Dawson's Creek. Holmes and Jackson dated during the first two seasons of the show.

22 of 50
Lea Michele and Cory Monteith

Perhaps one of the most heartbreaking stories of the on- and off-screen couples. Michele and Monteith met on the set of Glee in 2009. They dated for a year and a half up until Monteith's death in July 2013.

23 of 50
Kit Harington and Rose Leslie

24 of 50
Ben Affleck and Jennifer Lopez

Ah, Ben Affleck sure does love his Jennifers. Lopez and Affleck started dating when they met on the set of the 2003 film, Gigli. They even got engaged (yeah, we forgot too), but called it off two years later.

25 of 50
Drew Barrymore and Justin Long

Barrymore and Long starred together in the 2010 film Going the Distance. The world is almost positive they were a couple off-screen, but they never *officially* confirmed it.

26 of 50
Blake Lively and Ryan Reynolds

In 2010, Lively and Reynolds played love interests in The Green Lantern. However, the two were solely friends at the time since Lively was in a relationship with her other on-screen boyfriend Penn Badgley and Reynolds was married to Scarlett Johansson (is this a real life Gossip Girl episode?). However, Lively and Badgley split around the time of Reynolds and Johansson's divorce a year later, and the two have been inseparable ever since.

27 of 50
Kristen Bell and Dax Shepard

Bell and Shepard starred as boyfriend and girlfriend in the 2012 comedy Hit and Run. The pair got married in 2013 and now have two children together. We recently found out they briefly broke up before they got married. 😱

28 of 50
Vanessa Hudgens and Josh Hutcherson

These two hit it off after appearing alongside each other in Journey 2: The Mysterious Island. They spent an awful lot of time together and were basically in a relationship without the label.

29 of 50
Brad Pitt and Angelina Jolie

AKA the OG badass on-screen couple in Mr. and Mrs. Smith. Unfortunately the pair split in 2016 after 11 years of marriage and if you're asking, no, we still haven't recovered.

30 of 50
Rachel McAdams and Ryan Gosling

"It wasn't over, it still isn't over..."—us when we think about Rachel McAdams and Ryan Gosling's relationship. (Hint: It's definitely over.) Gosling is now married to Eva Mendes and they have two daughters together. 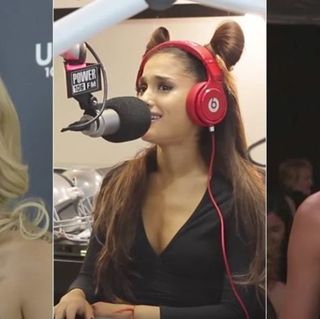