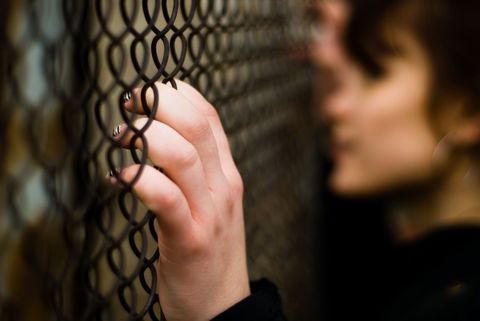 Facts I just learned from Grace Dunham: 1) Incarceration rates for trans and gender non-conforming (GNC) people are four times the national average. 2) That statistic is even greater for trans and GNC people of color.

These are facts that haven't changed despite the growing visibility of the trans community in media and pop culture. Facts that won't change just because a celebrity uses their platform to raise awareness. Tangible change, real change that actually helps people, starts at grassroots level—which brings us to Support.fm.

Dunham started the crowd funding platform (which is still in its initial stages) after her friends Rye Skelton and Blaine O'Neill came to her with the idea to build a website. Their plan? To create a coalition that helps existing grassroots organizations like Familia TQLMM and Black and Pink, and meets the urgent needs of countless queer, trans, and GNC people who are trapped in the prison system. Think of it as akin to Go Fund Me—only unlike Go Fund Me, Support.fm allows fundraising for legal defense and bail.

MarieClaire.com spoke to Dunham about why she and her friends started Support.fm, what it was like creating a website in an industry dominated by cis-gender white males, and the complicated nature of celebrity platforms.

"You can't discuss contemporary American politics without acknowledging the role that police and prisons play."

Marie Claire: Why did you start support.fm? What makes you so passionate about this particular issue?

Grace Dunham: My work has always revolved around mass incarceration—particularly the way it impacts LGBTQ people. In the mainstream gay rights movement, there's been a big emphasis on employment protection, marriage, visibility, and acceptance. And as important as these issues are, what doesn't get talked about as much is the impact that prisons have on LGBTQ people. Millions of people in the United States—especially poor people and people of color—are impacted and harmed by the prison system. You can't discuss contemporary American politics without acknowledging the role that police and prisons play. My identity is as a gender non-conforming person, so I think a lot about the way this issue hasn't entered into the broader gay rights conversation.

MC: Where does your personal interest stem from? Do you have friends and family in the prison system?

GD: To be totally honest, because I'm white and grew up with economic stability and security, I wasn't directly touched by the prison system. I was educated through friendships with people who had been impacted by it, and through having my consciousness raised by forging new relationships. It became really clear to me that there was this divide—particularly in the LGBTQ rights movement—between people who were and weren't acknowledging how central prisons and policing is to the experience of queer people. I saw that divide taking place along lines of race and class, and it's really, really important that this divide not remain. If it does, the LGBTQ movement is going to replicate what already takes place in America: a deep social divide between people who can turn away from mass incarceration, and people whose lives are deeply impacted by it.

MC: I'm surprised that no one has made a crowd funding coalition like Support.fm before. It seems so necessary.

GD: My two parters are really skilled coders and web developers, but software is difficult to build. But I don't think there's a huge emphasis on mass incarceration in the tech world. Also, coding is a highly paid skill that takes a lot of education, and is a predominately white, very cis, very male profession. It's not a skill that a lot of people doing grass roots organizing have access to.

"Representation has to come with structural change in order for people's lives to be transformed."

MC: What role does the media and pop culture play? You're in this unique position where you have a platform. Do you want to tap into that platform in the hopes that this issue gets higher visibility? Or do you shy away from doing so?

GD: I struggle with this every day when thinking about the work I do. Because you're right, I do have access to a platform that many of my mentors in activism don't. Because of how fame works, and if you have proximity to fame, those platforms are more open to you. Representation means so much to so many, and I don't want to underestimate what it must be like to watch a TV show and see yourself represented when you haven't before, but at the same time, representation is not transformation. Just because an issue or identity is represented, doesn't mean people in the real world have more access to employment, or that police will be less discriminatory. Representation has to come with structural change in order for people's lives to be transformed. So, I just try to be really strategic about it. The long term goal of Support.fm is creating pathways to get more money and resources to people impacted by prisons, and since I'm working with a coalition of activists and organizers, I feel comfortable using the platform I have access to.

MC: What don't you feel comfortable with?

GD: What I don't feel comfortable with is depicting myself as a hero of a movement that I'm just doing support work for. Like, I was appreciative that you reached out to me because a few magazines wrote pieces without reaching out to me. When they wrote about they said "Grace Dunham launches such-and-such project" without naming my collaborators, without naming the organizations I'm working on behalf of. That picks me up out of the crowd, and makes me into this sort of hero. What fame often does, is it takes an individual and makes them the face of something that was a collective project. It's important—particularly as a white person with a history of economic stability—to say that I haven't been impacted by police and prisons in the way a lot of people I organize or work with have. My role is as an ally and supporter. My role is to leverage the resources I have access to in a way that answers the needs and demands of those I'm working along side of.

"American culture is so divided around class and race, that a lot of times people with money aren't even connected socially with people being impacted by the prison system."

GD: That's why I was really excited about this project, it's a form of pretty rapid harm reduction. In my social network, I'll frequently see campaigns to come up with bail money. But American culture is so divided around class and race, that a lot of times people with money aren't even connected socially with people being impacted by the prison system. It's about creating new channels for the redistribution of wealth so there aren't these divides and separations.

MC: Why do you think so many people opt out of thinking about this issue?

GD: The LGBTQ movement is just as susceptible to the social inequities that broader American culture is susceptible to. I really do believe that all people are interconnected, and that it's false when people believe they can opt out of thinking about mass incarceration. But since it's not a part of basic education, many young white people don't rub up against it and are lead to believe they can opt out of it. We need to reframe the way we think about it. As long as mass incarceration impacts some people, it impacts society.

Find out more about Support.fm here.