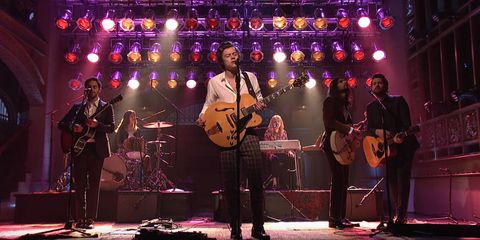 Harry Styles' long-awaited performance on Saturday Night Live did not disappoint, but the singer did surprise fans with his song choice. Instead of performing album track "Kiwi" as expected (he handed out slices of kiwifruit to fans before the taping), Styles performed "Ever Since New York."

Based on the title alone, fans had been wildly speculating that the song might be about Taylor Swift, since the pair were famously photographed together in Central Park in December 2012. After hearing the lyrics, however, fans now have some alternative theories regarding the song's subject matter.

"Ever Since New York" is a somber reflection, and takes Styles' music in a totally new direction. It's possible the track is about the end of a relationship, but it could also be about something bigger—like the ways the world has changed since 9/11, particularly the lyrics that reference spirituality and an emotional shift.

Hopefully, Styles will release detailed album liner notes to give us some clues about what this track is really about.