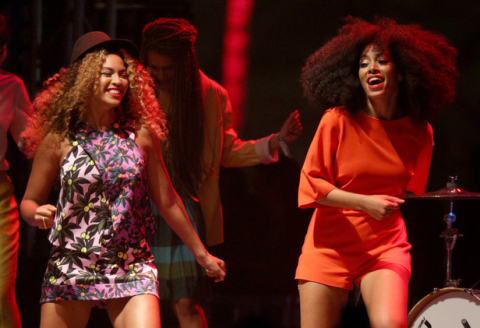 Beyoncé stunned crowds at Coachella 2014 on Saturday (April 12) as she joined her sister Solange on stage.

Although not part of the official lineup, the 'XO' singer appeared during her younger sibling's set at the Californian music festival.

The sisters performed an energetic synchronised dance routine to 'Losing You' in front of the excited crowd, before Beyoncé embraced Solange and left her to perform the rest of her show.

The surprise appearance came on the second day of the event, which also saw OutKast reunite for a 27-track headline set.

Muse, Arcade Fire, Lorde, The Replacements and Lana Del Rey are among the acts headlining this weekend. Haim, Kate Nash, Tom Odell, Bastille, Zedd, Warpaint, Laura Mvula and Foster the People also feature on the lineup. Back in August, Solange revealed plans to release her next full-length studio album in 2014.

Watch Beyoncé dancing with Solange at Coachella 2014 below: