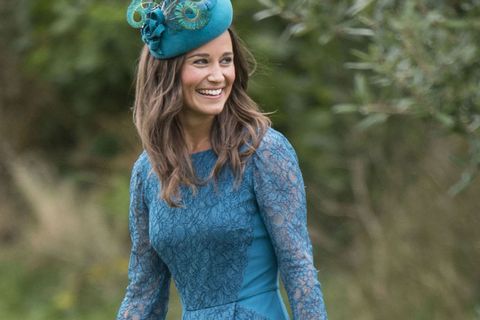 Like most middle-class British children, I was brought up to remember that if you can't say anything nice, don't say anything at all. Obviously it didn't stick because here I am working in journalism, but there you goI never stopped biting my fingernails either (sorry, mom). This etiquette lesson obviously didn't stick for famous upper-middle-class lady Pippa "sister of Kate" Middleton either, because out of nowhere today she's decided to slam Kim Kardashian and Kim Kardashian's figure specifically. Yes, it's a case of lady-famous-for-her-butt on lady-famous-for-her-butt crime, and a vicious, unprovoked one at thatparticularly so because it's really Pippa's only claim to fame outside of her family, whereas at least Kim has an iPhone game. As Brits would say, it's just not cricket.

Pippa has written a blog post, you see, which is a jolly fun thing to talk about over high tea. It's for esteemed British magazine The Spectator (via WWD) and, in the piece, Pippa compares the furor surrounding her butt, circa 2011's royal wedding, with that surrounding Kim's recent Paper magazine cover. It may be the year of the booty, but Pippa just doesn't understand it at all, you see:

"I must say that [my butt]though it has enjoyed fleeting fameis not comparable. But the Kim butt story did make me pause. What is it with this American booty culture? It seems to me to be a form of obsession. Kim's aim, apparently, was to break the Internet, but I'm not sure she's going the right way about it."

Now that K.Midd has been over in New York for a few days, she can come back with some insight on "American booty culture" for sister Pips who, sadly, does not offer any suggestions on what the "right way" to parlay one's ass into the cultural lexicon is either. If it involves a cookbook, then mama Kris is there already by proxy.

WWD reports that Pippa's blog post is "wide-ranging," which is probably a polite way of saying nobody felt comfortable editing a royal's in-law. For example, she also discusses a recent vacation to Italy on which she went truffle hunting. Truffle hunting! On this note, Pippa says she was very successful and now has more mushrooms than she knows what to do with. "I've had it with scrambled eggs, mashed potato, pasta and even just straight onto toast," she writes, in what appears to be all seriousness. "I didn't think it was possible to get bored of something so expensive, but I must say I'm a bit truffled out... That's what people call a first world problem, I know."

The only applicable response to that nonsense is this GIF, and it's K.Midd patting Pippa on the head, patronizingly:

From the editors of Cosmopolitan